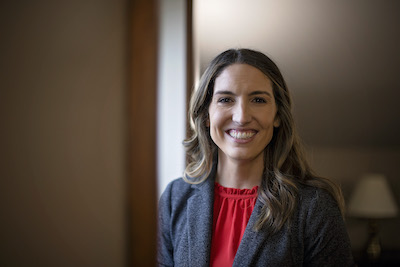 When clients of family law attorney Taylor Tippel first meet her, they often underestimate her because of her age, but she has experienced more in her 26 years than most. Today, Tippel has an accomplished career, undergraduate and law degrees, a loving fiancé and supportive family and friends, but she has faced numerous challenges to get where she is today.

As an undergraduate in Orlean Beeson School of Education’s human development and family science program, Tippel decided to enroll in the 3+3 accelerated program that would allow her to earn a bachelor’s degree in family science and a law degree in just six years. Tippel had always been interested in interpersonal relationships and family dynamics, so when she found a program that combined this interest with her love of law, she knew she had found her niche.

A week after graduating from Cumberland School of Law in May 2019, Tippel was diagnosed with a massive brain tumor behind her eye. Although she had been experiencing debilitating symptoms for months, she hadn’t been able to find anyone to take her concerns seriously. After her diagnosis, two neurosurgeons refused to operate on her due to the risk of death or blindness during surgery. Tippel finally found a neurosurgeon who was willing to help her get her life back. She was originally supposed to take the bar exam that July, but was scheduled for surgery instead.

“I was telling my doctor, ‘You need to get me through this, I need to study,’” said Tippel. “I was trying, but I don’t think I even made it through a chapter. I think that was just my way of coping with what was going on because I don’t think anyone who is 21 years old and told you have a massive brain tumor and you need surgery right away is ever going to handle that properly. My way of handling it was to pretend it wasn’t happening, and I’m just going to study.”

However, after waking up from surgery, Tippel knew taking the bar exam was not an option. She decided to postpone taking the exam for a year and went on medical leave with her employer, The Virga Law Firm, in Orlando, Florida. On top of all of this, Tippel’s husband at the time asked for a divorce.

Despite these challenges, Tippel began studying for the Florida bar exam again and upon passing, attended her swearing-in ceremony in November 2020. She now draws upon her educational and personal experiences to better relate to her clients. In her role at The Virga Law Firm, Tippel handles any cases related to the family unit, including divorces, child custody, prenuptial agreements, child support and adoptions.

Tippel credits the human development and family science program at Samford for her ability to relate to her clients.

“The amount of things that I learned that I apply now in my daily interactions with clients is too many to even count,” said Tippel. “The way that I handle people and how I can relate to people and knowing their specific needs and their children’s specific needs, that’s something that I won’t ever be able to quantify how valuable it is to me.”

Tippel experienced firsthand the importance of perseverance and resilience as she learned to use setbacks to propel her forward. She often shares with those going through law school, “If I can do it, you’re going to be just fine.”

Today, Tippel has already established an accomplished career. She was recently promoted to lead attorney in her office branch and named among Marquis Who’s Who for top attorneys in the nation. In addition to furthering her career, she is busy planning for her wedding in 2022.

“I’m grateful for everything that I went through because I think that it has made me the attorney that I am today,” said Tippel. “I’m grateful to be alive and praise God that I’m still here because I’m lucky to just even have a story to tell.”
Samford is a leading Christian university offering undergraduate programs grounded in the liberal arts with an array of nationally recognized graduate and professional schools. Founded in 1841, Samford is the 87th-oldest institution of higher learning in the United States. The Wall Street Journal ranks Samford 1st nationally for student engagement and U.S. News & World Report ranks Samford 37th in the nation for best undergraduate teaching and 97th nationally for best value. Samford enrolls 5,758 students from 48 states and 22 countries in its 10 academic schools: arts, arts and sciences, business, divinity, education, health professions, law, nursing, pharmacy and public health. Samford fields 17 athletic teams that compete in the tradition-rich Southern Conference, and ranks 3rd nationally for its Graduation Success Rate among all NCAA Division I schools.
Marketing and Communication Manager
Leighton Doores
ldoores@samford.edu
205-726-4751