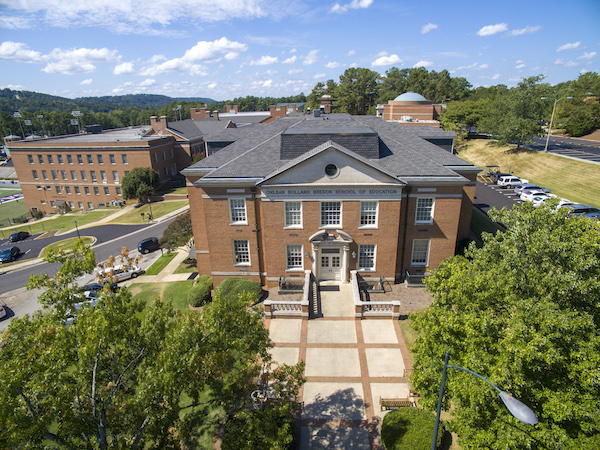 Members of the Zeta Theta chapter of Kappa Delta Pi, an international honor society in education, voted unanimously on April 29 to donate the entirety of its funds to Terra Nova Academy in Kampala, Uganda. The donation will be used to help fund construction of new playground equipment for the school.

Officers of the Zeta Theta chapter proposed this donation, totaling $4,000, in place of a spring service project.

“We proposed this donation to Kappa Delta Pi members after Samford's Terra Nova partner, Brock Scholar Reagan Bovenkamp, reached out to us with a need that had to be filled,” said Eulaya Erb ’21, who served as president of the Zeta Theta chapter this past year. “The mission of Terra Nova is one so close to the heart of every Samford educator, and we were beyond excited to partner with them this semester.”

Orlean Beeson School of Education has partnered with Terra Nova Academy on multiple projects since its inception in 2013.

“We believed that giving all that KDP had to a school in need was the greatest gift we could offer them to better their school,” said Emily Daniel ’21, who served as vice-president of the Zeta Theta chapter this past year. “Although this service project did not include heavy moving or physical labor, it did require open minds and open hearts to take a leap of faith to support a school that needed Samford's help.”

Terra Nova Academy was founded and is managed by Samford Schools of the Arts alumna, Alisha Damron Seruyange ’05, and her husband, Abdul. The school seeks to provide a high-quality education in a safe, nurturing environment for children from preschool to fifth grade. Emphasis is placed on Christian community, empowering students for leadership and healthy development partnered with creativity.

According to Terra Nova’s statistics, Uganda has one of the world’s youngest and fastest-growing populations. The country’s schools are underperforming or inaccessible due to its rapid population growth and lack of education infrastructure. Terra Nova, which means “new earth,” hopes to make a difference in Uganda’s education system by providing quality education at a price families can afford.
Samford is a leading Christian university offering undergraduate programs grounded in the liberal arts with an array of nationally recognized graduate and professional schools. Founded in 1841, Samford is the 87th-oldest institution of higher learning in the United States. The Wall Street Journal ranks Samford 1st nationally for student engagement and U.S. News & World Report ranks Samford 37th in the nation for best undergraduate teaching and 97th nationally for best value. Samford enrolls 5,758 students from 48 states and 22 countries in its 10 academic schools: arts, arts and sciences, business, divinity, education, health professions, law, nursing, pharmacy and public health. Samford fields 17 athletic teams that compete in the tradition-rich Southern Conference, and ranks 3rd nationally for its Graduation Success Rate among all NCAA Division I schools.
Marketing and Communication Manager
Leighton Doores
ldoores@samford.edu
205-726-4751