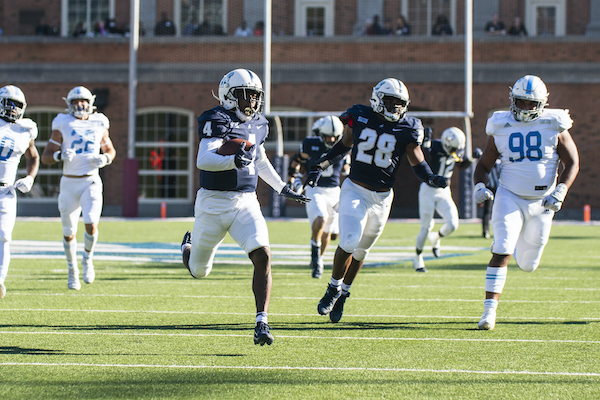 As a senior in human development and family science as well as an All-American wide receiver on Samford University’s football team, Montrell Washington has learned to excel not only on the football field, but in the classroom as well.

At the beginning of the school year, the classroom was not a place where Washington felt completely comfortable. He was much more at home on the football field where his expertise shined. Distinguished Beeson Professor Clara Gerhardt saw the confidence Washington had when it came to his sport and she knew he could find that in the classroom as well. Gerhardt, who has seen many ballets but never a football game, bet Washington that she could turn him into a scholar before he could turn her into a football player.

“I said, ‘I know I’m going to win this race because there’s no chance you’re going to turn me into a football player whereas I have a very good chance of turning you into a graduate,’” said Gerhardt.

When it was time for student-athletes to nominate various professors for “Professor of the Game,” an honor given at each home football game to highlight the educator’s hard work and dedication, Washington knew this was his chance to invite Gerhardt into his world and make her into a football fan.

“I was just like, if she can turn me into a professor then I can turn her into a football player, and after that I just started to be more interested and she started to understand me better so it just created this bond,” said Washington.

When Gerhardt acknowledged that she would feel vulnerable and out of place walking on to the football field, Washington told her that’s how he has felt many times in the classroom. As the two began to step into the other’s shoes, they gained a perspective they wouldn’t have had if the roles hadn’t been reversed. 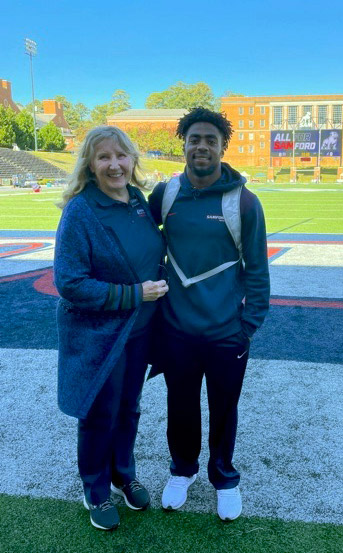 “We as professors are equally vulnerable when we go out into an area that we don’t know well and he picked up on that,” Gerhardt said. “He’s the stronger one of the two of us.”

After spending more time in Gerhardt’s classroom, Washington says his confidence has grown.

“I’ve learned to just put yourself out there and give it a try,” he said. “Even if it’s not correct or you may be wrong, Dr. G would always say ‘Just try, just do it.’”

Because Washington stepped out of his comfort zone and then shared his area of expertise, a bridge was built between two people from different generations, cultures, backgrounds and skills, demonstrating we can all gain a new perspective by stepping into another’s shoes.

At the Homecoming game on Nov. 6, Gerhardt was named “Professor of the Game” as she stepped on to a football field for the first time. Washington continued to shine as he had a 68-yard punt return for a touchdown.