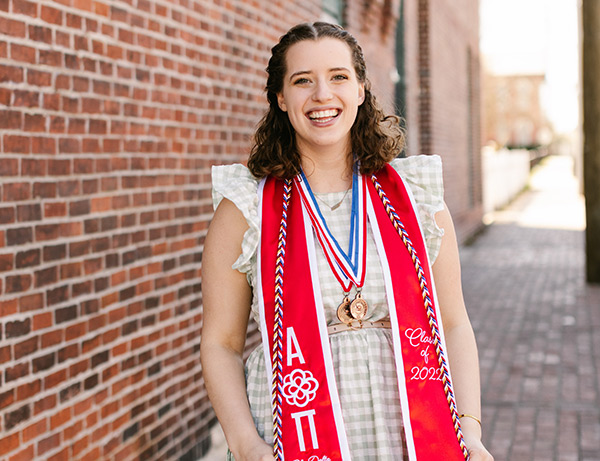 As Orlean Beeson School of Education bids farewell to the graduating class of 2022, it looks ahead to welcoming another generation of educators in the Fall semester.

Such a standard is easily seen in the faculty and students at Samford University, faculty like David Little, teacher turned colleague with one his former students, Karen Birkenfield. It can also be seen in the life of McEwan and recent graduate Rose Tarwater.

Tarwater, who received several awards including the Dean’s Award for Outstanding Teacher Education and the Most Promise as an Exemplary Teacher, graduated in April with a bachelor’s degree in elementary education and her certification to teach in both general education and special education classrooms.

She and McEwan have a special connection through a person who taught them both the importance of educating and serving others.

“My grandmother, Jo Alice Tarwater, was a teacher, principal, curriculum coordinator, and Assistant Superintendent for Human Resources all in the Escambia County School District in Pensacola, Florida. She was a beloved educator that people still remember today, and she is the reason that I want to be a teacher! I am starting my teaching career in the same district that she dedicated hers to,” Tarwater said.

Her grandmother also impacted McEwan as the first principal she worked for.

“I met senior Rose Tarwater last year and although her unique last name stuck with me, I only recently learned that she is a granddaughter of the late Dr. Jo Alice Tarwater who was my first principal at Myrtle Grove Elementary School in Pensacola, Florida,” McEwan said.

Tarwater’s grandmother was there when McEwan was just starting out, and through her impact, she is also there for her granddaughter as she begins her journey as an educator.

“Dean McEwen shared with me advice that my grandmother gave her in her first year of teaching, ‘What you lack in experience as a new teacher, you make up for with enthusiasm! Now, go teach your heart out and stop worrying so much!’ Hearing this advice from Dean McEwen on the cusp of my own first year teaching was like my grandmother was sharing it with me.” Tarwater said.

Tarwater’s grandmother passed away when she was in the fifth grade, but her legacy lives on in the generations she impacted as she was pursuing her calling.

“Teaching is a life-giving, generative profession in that we have the blessing of observing the ripple effect of our efforts. With Rose, her grandmother took a chance in hiring me, an inexperienced 22-year-old fourth grade teacher, who later became a professor who prepared future teachers and then dean of education at Samford where her granddaughter was preparing to study,” McEwan said.

Tarwater says her time at Samford has prepared her to follow in her grandmother’s footsteps.

“I have learned to give my all to what I am working on, while also balancing time for rest and time with family and friends. I have learned how to lead others and to grow from my mistakes. In the education school, especially, I have learned how to plan and be prepared for what is to come, while also being readily able to adapt and adjust when plans change. All of these things have prepared me to leave Samford with confidence in myself and my abilities,” Tarwater said.