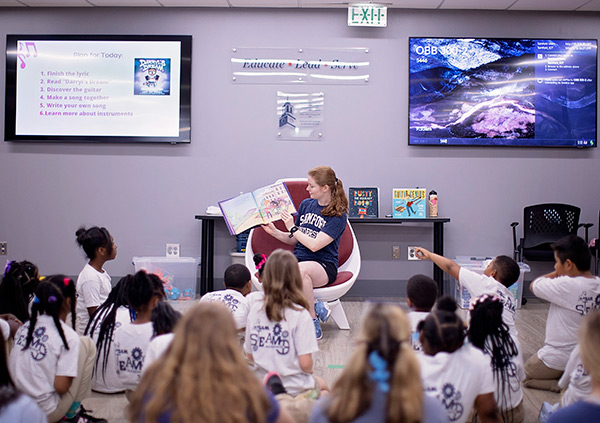 About 30 juniors majoring in teacher education at Orlean Beeson School of Education recently hosted 75 second-grade students from i3 Academy for SAM STEAM Academy.

The professional development event was designed to share the importance of STEAM, an educational approach integrating science, technology, engineering, the arts and mathematics. It created the opportunity for personal application for students to identify STEAM in their daily lives and in a possible career for them.

“STEAM is everywhere and it’s our future” said Amanda Stone, technology and education learning commons coordinator. “We want to make sure that our students have the opportunity to see it, explore it, apply it and let them know they can be anything they want to be.”

The elementary school students rotated between three different exploratory and hands-on stations each offering a different area of focus. The first explored the “CeCe Loves Science” book series with a focus on science, animals, weather, camping and geology. Students were able to exercise observation and learn about their five senses as well as code Bee Bots to different animals and weather conditions.

The second station focused on music and the use of Specdrums. Students learned how music and the arts can integrate STEAM and how to incorporate robots into the classroom.

The third station focused on the engineering design process including what to do with an idea, how to create an idea and how to identify problems with an idea. Students were able to use cardboard, Magnatiles, and Legos to design and build structures.

Damita Dunn Pitts, Ed.D., an assistant professor at Stillman College and author of My Friend George is a Bully, served as the guest speaker. Pitts believes that exposing children to literature and encouraging them to share their own stories is vital for childhood development.

“From birth to adulthood, and beyond, reading is important. I had a teacher who once told me that books will take you anywhere, and I believe that. Reading is essential to all of us, and the earlier the better,” said Pitts.

This year, the SAM STEAM Academy brought special attention to the arts by incorporating the Young Author’s Conference, an Orlean Beeson School of Education tradition. The event was made possible by the generosity of the Charles and Estelle Campbell Foundation and the Carter family, as well as the many Samford students and faculty who hosted the i3 Academy.

Nell Branum is the daughter of the late Dr. John T. Carter and Dr. Frances Carter. Dr. John Carter joined the Samford faculty in 1956 and served until his retirement in 1987.  He was dean of the School of Education from 1980 until 1986. His wife, Dr. Frances Carter, also served as a senior faculty member for many years and founded our early childhood education program. The Carters have supported education programs by funding scholarships, awards and sponsoring the Young Authors Conference held annually here at Samford.

Branum spoke of her parents' legacy and the impact this event has had on her, her family, and young students throughout Samford history.

“They really loved the idea of the children being able to write something. They got children to write poems in their workshop and loved to see them write. I grew up on Samford’s campus, I learned to read in the curriculum lab. When I grew up, I went to Samford, my husband went to Samford, and two of our children went to Samford. There’s no place like Samford,” said Branum.

Events like SAM STEAM and the Young Authors Conference give Samford students a unique opportunity to both learn and teach the importance of instilling passion in young children. The event allowed Samford students to explore STEAM as a method of teaching and demonstrated how to engage students in STEAM and encourage student inquiry, dialogue, discovery and critical thinking.