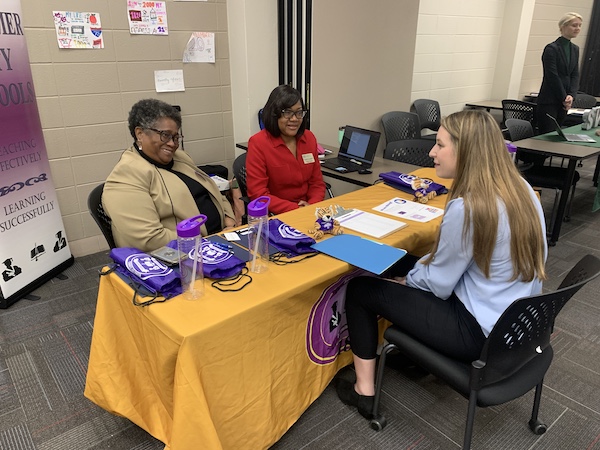 According to Myrtis Johnson, clinical experiences coordinator, each teacher candidate has two placements during their spring clinical internship and will spend the entire semester in schools based on their content major. This year, interns were also allowed to obtain a substitute teaching licensure to help with the teacher shortages at the schools where they are completing their clinical internships.

“Interview Day is such a valuable tool because the seniors have worked for three plus years to gain the skills and knowledge to become a professional educator,” said Johnson. “This gives our seniors a chance to showcase their abilities and talk about their experiences and ask questions from highly qualified educators who have been where they are trying to go.”

According to Dana Waldrop, career consultant in the Career Development Center, the event is mutually beneficial for both Samford students and the school recruiters because it brings so many schools and candidates together in one place.

“One thing we hear from recruiters is how excited they are to meet Samford students,” said Waldrop. “They’re very excited about the prospect of hiring our students because Samford just has such a great reputation not just in the community but in the Southeast and even farther.”

Caroline Bohannan, a senior majoring in early childhood, special education, elementary, elementary collaborative, views the event as an opportunity to find a good match for both the student and the school.

“Having Samford be able to pull all these schools is a really nice opportunity because as a student who’s not from Alabama, I don’t know a lot of the schools and opportunities around here,” said Bohannan. “Being able to see them all in one location has given me so many more options than what I would be able to do on my own.”

For more than 17 years, Orlean Beeson School of Education and the Career Development Center have collaborated to bring Interview Day to students and recruiters.

“We could not have a successful teacher education program without the support of our local partners as well as surrounding states and international organizations,” said Johnson. “It is truly an honor to host our partners each year and support their efforts to hire quality seniors to meet the needs of their school system or organization.”