To Take the Elevator or the Stairs?

Research conducted by undergraduate kinesiology students in the School of Health Professions revealed that with a simple recommendation, people often choose the latter. 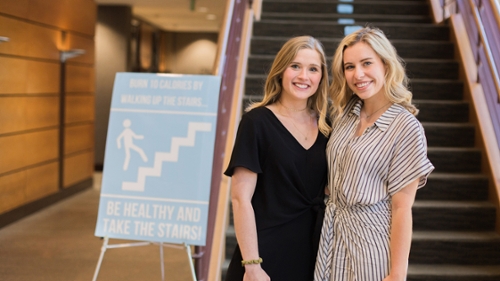 A grand staircase stands in the lobby of Samford University’s College of Health Sciences, and every day students and faculty make the choice: take the elevator or walk the stairs. One day in March, a sign appeared next to the staircase. It read, “Be healthy and take the stairs,” and on each step a small sign showed the numbers of calories one would burn.

Anna Kate Leone and Samantha Williams, a team of health science majors in the school’s Department of Kinesiology, erected the signs for their required senior research project. Under the mentorship of assistant professor Mallory Marshall, the two seniors investigated whether a calorie-counting sign influenced public behavior.

The signs were up for two weeks, and Leone and Williams measured the percentage of people who took the stairs before, during and after the two weeks of prompting. They then reported their results. While the signs prompted a 10% increase in stair climbing, participation dropped to previous levels once the signs were taken down. The conclusion? A two-week prompt didn’t change long-term behavior.

“We chose this stair climbing project because of our department’s emphasis on preventative medicine,” Williams said.

“There is so much the public can do to prevent disease and aid in healing. We know these things are good, but how can we encourage people to do these things in our instant-gratification world? That’s what inspired our research.”

Marshall, a published scholar with her Ph.D. in exercise physiology, said this public project drew attention to the School of Health Professions’ distinction of introducing scientific inquiry principles to undergraduates. “Only 10% of undergraduates nationwide do some type of research project. It really is a big undertaking for them, but it’s a valuable tool to teach students to defend their decisions with data and research.”

Leone said the process sharpened her critical thinking, reading and writing skills. Williams agreed. “This gives you a researcher perspective, rather than an audience perspective. It helps you think critically, rather than just believing anything you’re told.”

Marshall explained that the school’s focus on undergraduate research also encourages students to see parallels between data-based scientific decisions and life decisions based upon Christian truths.

“We are helping students discern reliable information on which they can base their decisions for their patients. Just as researchers have evidence on which to base their professional decisions, we want students to understand that we have our Christian faith as our foundational base on which to make our personal decisions,” Marshall said. 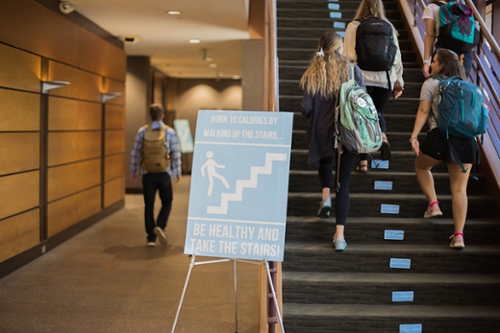