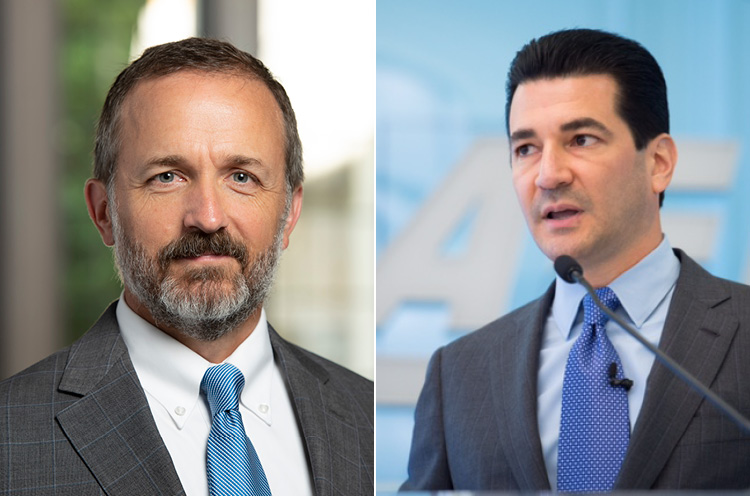 Both men will be honored during a luncheon at the Healthcare Ethics and Law Conference, which is celebrating its 20th anniversary, on Friday, Sept. 6, at Samford University. In addition to attending the luncheon, they will also serve as the conference’s keynote speakers.

Gottlieb, a resident fellow at the American Enterprise Institute (AEI) and the 23rd commissioner of the Food and Drug Administration (2017-19), will speak immediately following lunch on the impact of the Agriculture Improvement Act, which during his tenure as commissioner, removed hemp from the federal Controlled Substances Act.

While at the FDA, Gottlieb focused on a wide variety of issues, including drug pricing, medical product innovation, food safety, vaccination, and tobacco and vaping. He advanced new policies to address opioid addiction, working to rationalize prescribing as a way to reduce the rate of new addiction. He also helped make the regulatory process for the development and review of novel drug and medical devices more efficient, including the approval of the first gene-therapy-based cancer treatment.

Today, in his role as a resident fellow with AEI, he continues his work in improving public health through entrepreneurship and medical innovation

Curlin is a hospice and palliative care physician at Duke University where he holds joint appointments in the School of Medicine, including its Trent Center for Bioethics, Humanities & History of Medicine, and in Duke Divinity School, including its Initiative on Theology, Medicine and Culture. At the conference, he will speak on the topic, “Suffering, Marijuana and the Goals of Medicine.”

At Duke, Curlin works with his colleagues to foster scholarship, study, and training regarding the intersections of medicine, ethics, and religion. His empirical research charts the influence of physicians' moral traditions and commitments—both religious and secular—on physicians' clinical practices. As an ethicist, he addresses questions regarding whether and in what ways physicians' religious commitments ought to shape their clinical practices in a plural democracy.