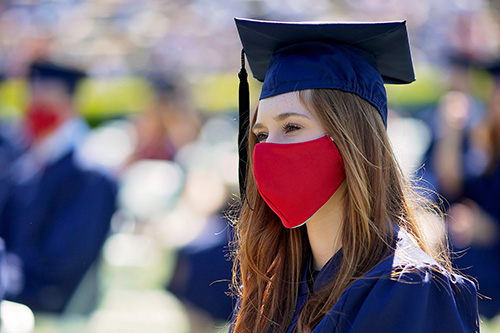 Samford University’s College of Health Sciences continued its spring commencement season with its ceremony for undergraduate programs on May 7. The four schools in the college—School of Health Professions, Moffett & Sanders School of Nursing, McWhorter School of Pharmacy and School of Public Health—awarded a total of 318 bachelor’s degrees to graduates in the Class of 2021.

The ceremony took place outside in Seibert Stadium with graduates and their families in attendance. University President Andrew Westmoreland served as the commencement speaker.

In his remarks, Westmoreland continued to share lessons he has learned throughout his 42-year career in higher education. His first three lessons were shared at the commencement ceremony for the College of Health Sciences’ graduate programs on April 23, which included:

To the Class of 2021, Westmoreland shared:

I need to apologize—quickly and without qualifying conditions—when I have been wrong or when I have hurt someone.

“You will likely make a few mistakes in life,” Westmoreland said. “Some of them will be worse than others. But when you have been wrong or when you have hurt another person, don’t let the sun set before you do your part to put things right."

He encouraged graduates to not make excuses, but instead, be quick and sincere to apologize.

I need to recognize that the loneliness I sometimes feel is actually shared by everyone.

“I used to think that everybody else somehow managed to incorporate life lessons that I had missed. Then a few years ago, I came to understand that some people are just a lot better at putting on a happy face,” Westmoreland said.

“Loneliness, even when surrounded by people, is far more common than most of us admit. We all doubt our own abilities, wonder about navigating challenges and occasionally think that we are truly alone,” he said. “As I have come to realize that the things that bother me are more nearly universal than I knew, my burdens have been easier to bear.”

I need to find happiness in the fleeting moments of the day.

Westmoreland shared that he had a friend who placed a note on his computer with the phase: Every minute counts. This reminder, he said, is important. “Even on an entirely rotten day when nothing is going your way, lift your head from the clutter and think of someone dear to you or… something of joy that you plan to do after you live through whatever it is bogging you down at the time... your spirit will be calmed, and you will have renewed strength for the journey.  I need to find happiness in the fleeting moments of the day,” he said.

Westmoreland plans to share his final three lessons at the commencement ceremony on May 8 for graduates of Samford's School of the Arts, Howard College of Arts and Sciences, Brock School of Business and Orlean Beeson School of Education.