As a part of a Center initiative, learn how a School of Public Health student made a lasting difference in Haiti during a time of crisis.

When Megan Scott arrived in Haiti, she had only vague expectations beyond that hope that her education in nutrition might be of some service to the children she knew were suffering from severe hunger and malnutrition.

Scott and two Samford classmates, Katie Snider and Anna McCoy, went to Haiti for Jan Term in 2010 to work at the Canaan Christian Community, an orphanage, clinic and school run by Pastor Henri Gaetjens and Sister Gladys Mecklembourg. Canaan is home to more than 100 children. As part of the orphanage, Canaan runs a school and medical clinic that, for many, is the sole source of health care available. As part of the medical clinic, Canaan operates a malnutrition clinic for small children. It was here Scott and her classmates hoped to use the skills they’d learned as nutrition and dietetics students at Samford.

Haiti, even before the massive earthquake that devastated the country in 2010, was clearly one of the poorest countries in the world. According to the United Nations World Food Programme, three-fourths of Haitians live on less than $2 a day and half the population earns less than $1 per day. Nearly three-fourths of the country’s 10 million people are “food insecure,” meaning they live daily with the threat of hunger and starvation. There is limited access to clean water and, as a result, cholera and diarrhea are constant threats. And the hardest hit are children under the age of five.

“The cost of malnutrition in small children is high,” Scott says. “The first five years are the most important, in terms of growth. So many of the children that came into the clinic looked like infants, even though they were four or five.”

Children in the malnutrition clinic are put on a nutrition program, primarily of Medika Mamba. Medika Mamba is a ready-to-use therapeutic food made of ground roasted peanuts, powdered milk, cooking oil, sugar, vitamins and minerals. For many of the children in the program, it is their only source of protein and nutrients. According to Meds for Kids, within six weeks of starting treatment, 85% of children on Medika Mamba recover, far better than the 25% survival rate with older milk-based treatments.

“We would get to the clinic early on the days we worked, in part because our rooms were right above the kindergarten classes and they would start singing at six in the morning,” Scott says. “Our days were full. We would typically see 50 or more children a day. We would measure each child, height and weight. Based on each child’s progress, we would increase or decrease their dosage. We’d talk to their parents about what their kids were eating. We’d try to make sure that the children were the ones actually eating the Medika Mamba. It is a very difficult situation, where so many people are hungry. The smallest children are the ones who suffer the most.”

Despite the severity of the hunger crisis, Scott said her time in Haiti wasn’t all difficult. “The most fun was just hanging out with some of the kids at Canaan,” Scott says. “Two in particular: Wenshel, who was three and Nevaudson who was around one. I would play with them every chance I got. They were so much fun to be around.”

On January 10, things changed for Scott and all of Haiti.

“We were outside and the ground began to shake. It went on for what felt like an hour. We kept asking each other, ‘Was that an earthquake?’

“We were 30km or so from Port au Prince, so we had no idea how devastating the earthquake was right off. There was no power, no phones. We could get the internet from time to time. I posted something on Facebook, again not knowing how bad things were, and that’s how my family found out I was ok.”

Getting out of Haiti soon proved to be difficult. Gas for the orphanage truck was precious, so driving back to Port au Prince was impossible. Scott’s father was in the military and worked to have Scott and her friends extracted by helicopter. Three days after the earthquake, the three Samford students were on a Puerto Rican National Guard helicopter flying into the Port au Prince and then the Dominican Republic.

“It was surreal,” Scott says. “There were no people on the streets when we flew into Port au Prince. It was hard to judge the damage from the air, but clearly everything was wrong. We waited a few hours at the airport before flying on to the Dominican Republic.”

Looking back, Scott sees the impact the trip to Haiti had on finding her calling.

“This trip actually helped me decide what I wanted to do with my degree after college. Before Haiti, I was unsure if I wanted to go to medical school or head down the path of becoming a registered dietitian. Obviously there is a huge need for medical care in third world countries, but what I realized is that so many of the problems have a root in nutrition. It's the same here in the United States. I discovered that I wanted to use nutrition to not only help in healing a problem that already existed, but also to educate to prevent so much of what I saw. I don't want to see kids broken before they even get a chance at life. Part of preventing that is medicine, but nutrition is just as important. And that is the path The Lord is leading me down now. I hope to use the talents He has given me with nutrition to make an impact, even if it's just for one kid regardless of where they live in the world.” 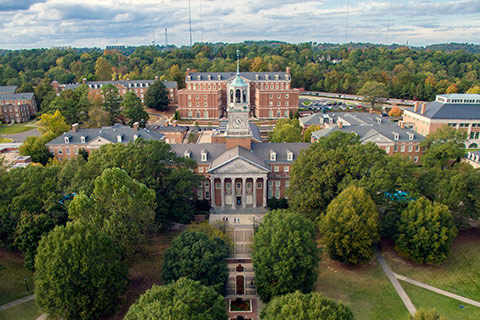