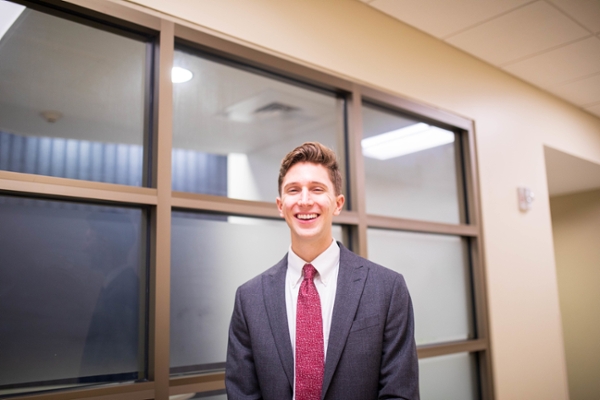 Ben Lange, a student researcher on the project

Leading up to the U.S. national election Nov. 3, students and faculty in Samford University's Center for Sports Analytics explored beyond the world of sports data. In the months prior to the election, the group gathered various metrics on 4.4 million followers of the official Democratic Party and Republican Party Twitter accounts.

The interest analysis allows the student and faculty researchers to determine the top 1,000 most relevant and highest affinity accounts of followers of the Democrat and Republican parties. Interest data includes items such as what news sources party members tend to follow, the most relevant restaurants, and professional and college level sports teams that members of each party affiliate with. The relevance score is a custom calculation for how contextually influential, or relevant, an interest is to Democrat and Republican followers. The affinity score is a custom calculation that measures how many times more likely they are to have an interest as compared to the entire social network.

"This was a great project that allowed students the chance to get involved in the work of the center in a way they may never have considered," said Darin White, executive director of the center and chair of the Entrepreneurship, Management and Marketing Department in Brock School of Business. "The data that we were able to uncover was very interesting. This was a fascinating way to expand the work of the center outside of the world of sports."

The Center for Sports Analytics has utilized the Affinio platform for many years on hundreds of projects and has thoroughly validated their metrics via traditional marketing research methods.

"Helping Dr. White with the research on political party members and their social media tendencies was very eye opening, as I have not done any research in this field before," Lange said. "It helped expand my interests to subjects outside of business and showed me that marketing research has applications outside the business world."

The Samford's Center for Sports Analytics promotes the ethically-centered, rational inquiry into issues at the intersection of big data, analytics and sports. The center seeks to be an international thought leader in the emerging field of sports analytics by providing a forum for industry professionals and students to learn about the increasing role of analytics in the global sports industry. The center is dedicated to fostering growth and innovation in this arena, and the center seeks to enrich opportunities for learning about the sports industry. The center's mission encompasses all areas where analytics impacts sports including fan engagement, sponsorship, player tracking, sports medicine, sports media and operations.