A new book co-written by Brock School of Business professor of economics Art Carden, Leave Me Alone and I’ll Make You Rich: How the Bourgeois Deal Enriched the World, has topped Amazon charts for new releases in November.

In the new releases for free enterprise and capitalism books, the publication’s hardcover issue remained #1 for numerous weeks, and the Kindle edition was #3 for the first few weeks of the month. Simultaneously, the book hit #2 for the hardcover and #6 for the Kindle version in the economic history new releases. Early in the month, the publication hit #5 for new business and finance textbook releases and #4 in economics textbooks, where it briefly held the #1 spot. Lastly, the hardcover listed #1 in the political ideologies category.

The book, co-authored with renowned economist and historian Deirdre Nansen McCloskey, is a refinement of her trilogy on the Bourgeois era. In this volume, McCloskey and Carden bring together the trilogy’s key points and arguments. It combines history, economics, literature, philosophy and pop culture, and is the perfect introduction for a broad audience to McCloskey’s influential explanation of how we got rich. 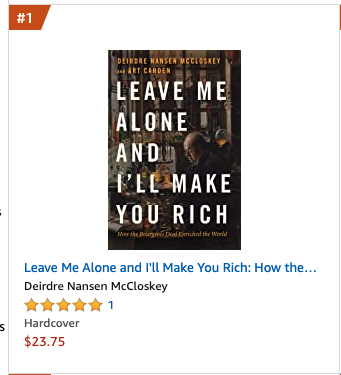 Carden provides a full overview of the book in this interview.