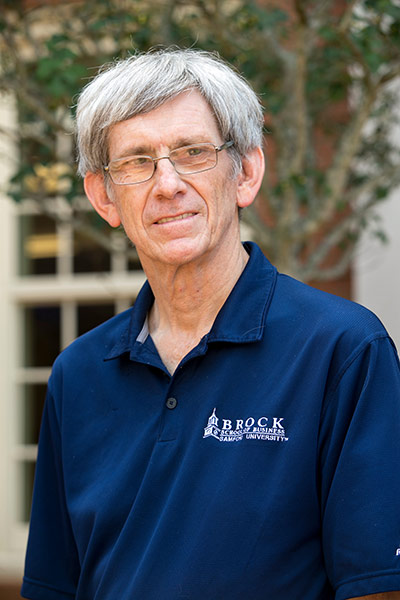 Larry Harper has been a beloved faculty member in Samford University’s Brock School of Business for more than 30 years and will retire after the fall 2021 semester. In honor of his outstanding career, Brock School of Business has renamed its Faculty Service Award as the Professor Larron C. (Larry) Harper Service Award.
As a native of South Africa, Harper’s career has spanned the globe. Before entering academia, Harper was a senior manager in Ernst & Young’s Washington Utility Group and served as a management board member and chief financial officer at Eskom in South Africa which is among the world’s largest electric utilities.
In June 1991, Harper brought his international business experience to Samford as the director of the Global Utilities Institute. Under his direction, the institute undertook numerous training and management development projects worldwide. He trained managers and provided consulting services to companies in Asia, Europe, Africa and North America. Throughout his 30-years at Samford, he held many other meaningful roles in Brock School of Business including the director of the Executive Education program and the director of Graduate Programs. He was successful at leading roundtable events that provided an interface for Brock School of Business with prominent chief financial and information leaders across the state and region, while also having served in multiple roles within the school’s committee structure.
At the university level, Harper served as chair of the Dean of Libraries search committee, a member of the Faculty Senate, a member of the Learning and Information Technology committee and the University Curriculum Committee. Additionally, he served as Samford’s American Mock Trial Association faculty adviser and Samford’s Sigma Phi Epsilon fraternity faculty adviser.
In the community, Harper served in volunteer roles at the Birmingham Sister Cities Commission and the Birmingham International Center, as well as serving his church, South Highland Presbyterian Church, as an elder.
“Larry has made a tremendous impact on our university and especially Brock School of Business,” said Dean Chad Carson. “His service to our students and our community is the embodiment of what this award means, and we are delighted to rename it his honor.”
As part of the award, the Professor Larron C. (Larry) Harper Endowed Fund has been established to provide a stipend to the annual faculty award winner.
To support the award in honor of Professor Harper, click here.
Checks, including “The Larry Harper Endowment” written in the memo line, may be hand delivered to the Brock School of Business Dean’s Office or mailed to:
Samford University
Brock School of Business
Attn: Dean Chad Carson
800 Lakeshore Drive
Birmingham, Alabama 35229
Samford is a leading Christian university offering undergraduate programs grounded in the liberal arts with an array of nationally recognized graduate and professional schools. Founded in 1841, Samford is the 87th-oldest institution of higher learning in the United States. The Wall Street Journal ranks Samford 1st nationally for student engagement and U.S. News & World Report ranks Samford 37th in the nation for best undergraduate teaching and 97th nationally for best value. Samford enrolls 5,758 students from 48 states and 22 countries in its 10 academic schools: arts, arts and sciences, business, divinity, education, health professions, law, nursing, pharmacy and public health. Samford fields 17 athletic teams that compete in the tradition-rich Southern Conference, and ranks 3rd nationally for its Graduation Success Rate among all NCAA Division I schools.
Marketing and Communications Manager
Morgan Black
mblack3@samford.edu
205-726-4753