Perseverance Pays Off, Stone Article Selected for Publication in One of the Nation's Top Banking Journals 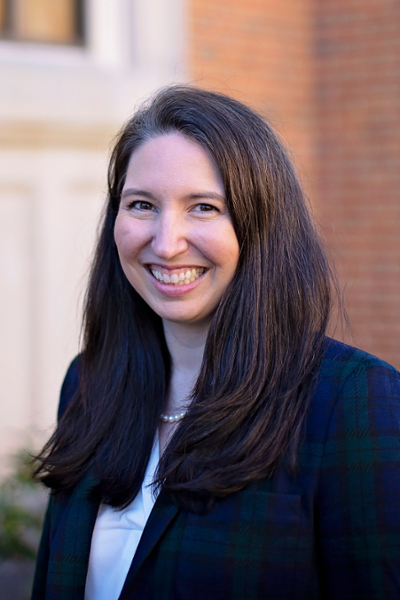 A new article by Anna-Leigh Stone, assistant professor of finance in Samford University's Brock School of Business, has been selected for publication in the Journal of Banking & Finance, one of the nation’s top banking journals. In “Double the insurance, double the funds?”, Stone presents more than six years of research regarding the workings of private insurance organizations in the state of Massachusetts, the Depositors Insurance Fund and Share Insurance Fund.
While attending an academic conference in 2015, around the same time she interviewed for the faculty position at Samford, Stone was presented with information about these excess deposit insurers, a topic she had little knowledge of at the time. She began her research about it to include in another paper she was working on, only to realize that there was not much information published about the topic at all, especially in academic literature. This is where her journey to a new piece began.
She finished the initial draft the first semester she started at Samford and began submitting it to various conferences to be considered for presentation. While sharing her findings this way, Stone received commentary from her conference peers that they thought it was interesting research and that they had never heard about it before. It was then, in 2019, that she completed her draft and submitted it to be considered for publication by an academic journal.
Although her first draft was rejected in spring 2020, just around the time the COVID-19 pandemic arrived in the U.S., Stone picked back up, reviewed what she had written, and began working again. She then began to rewrite her piece, including refreshed methodology and data. After working toward the completion of her new paper, all while expecting her first child, she made the decision to aim big and submitted her article to the Journal of Banking & Finance, one of the top academic banking journals in the nation, on Aug. 7, 2020.
Then, her perseverance paid off. After receiving comments and editorial suggestions over the course of a year from journal reviewers, Stone received word that her paper had been accepted, one year to the day from the date of her submission, on Aug. 7, 2021.
Backed by her research presented in the article, Stones examines the full guarantee on deposits held at member Massachusetts state-chartered savings and cooperative institutions since 1934. She also controls for the choice of the bank to participate in these funds using two unique instrumental variables and find that member institutions held approximately one-third more deposits over the Federal Deposit Insurance Corporation (FDIC) limit when compared to similar state institutions.
In addition, Stone found that member institutions experienced a larger flight to deposits than nonmember institutions during the financial crisis and recession in 2008. Through her study, it’s evident that private deposit insurance might lessen concerns of deposit loss and reduce the burden on federal emergency guarantee programs.
Unlike many academic journals that are moving to digital formats, the Journal of Banking & Finance still issues a printed edition and Stone’s article will be included in volume 133 which will be available in December 2021. In addition to her peers in academia, her research will possibly be read by policy makers and leaders at the Federal Reserve and the FDIC.
Stone said, “This paper is a wonderful reminder to listen to the advice and suggestions of others, believe in your work, and aim high. I am delighted with the acceptance of this paper and feel it is an incredible validation of all the work I have put over the past six years. I am ready to get to work on my next project and see where it takes me.”
Samford is a leading Christian university offering undergraduate programs grounded in the liberal arts with an array of nationally recognized graduate and professional schools. Founded in 1841, Samford is the 87th-oldest institution of higher learning in the United States. The Wall Street Journal ranks Samford 1st nationally for student engagement and U.S. News & World Report ranks Samford 66th in the nation for best undergraduate teaching and 104th nationally for best value. Samford enrolls 5,683 students from 47 states and 19 countries in its 10 academic schools: arts, arts and sciences, business, divinity, education, health professions, law, nursing, pharmacy and public health. Samford fields 17 athletic teams that compete in the tradition-rich Southern Conference, and ranks 6th nationally for its Graduation Success Rate among all NCAA Division I schools.
Marketing and Communications Manager
Morgan Black
mblack3@samford.edu
205-726-4753