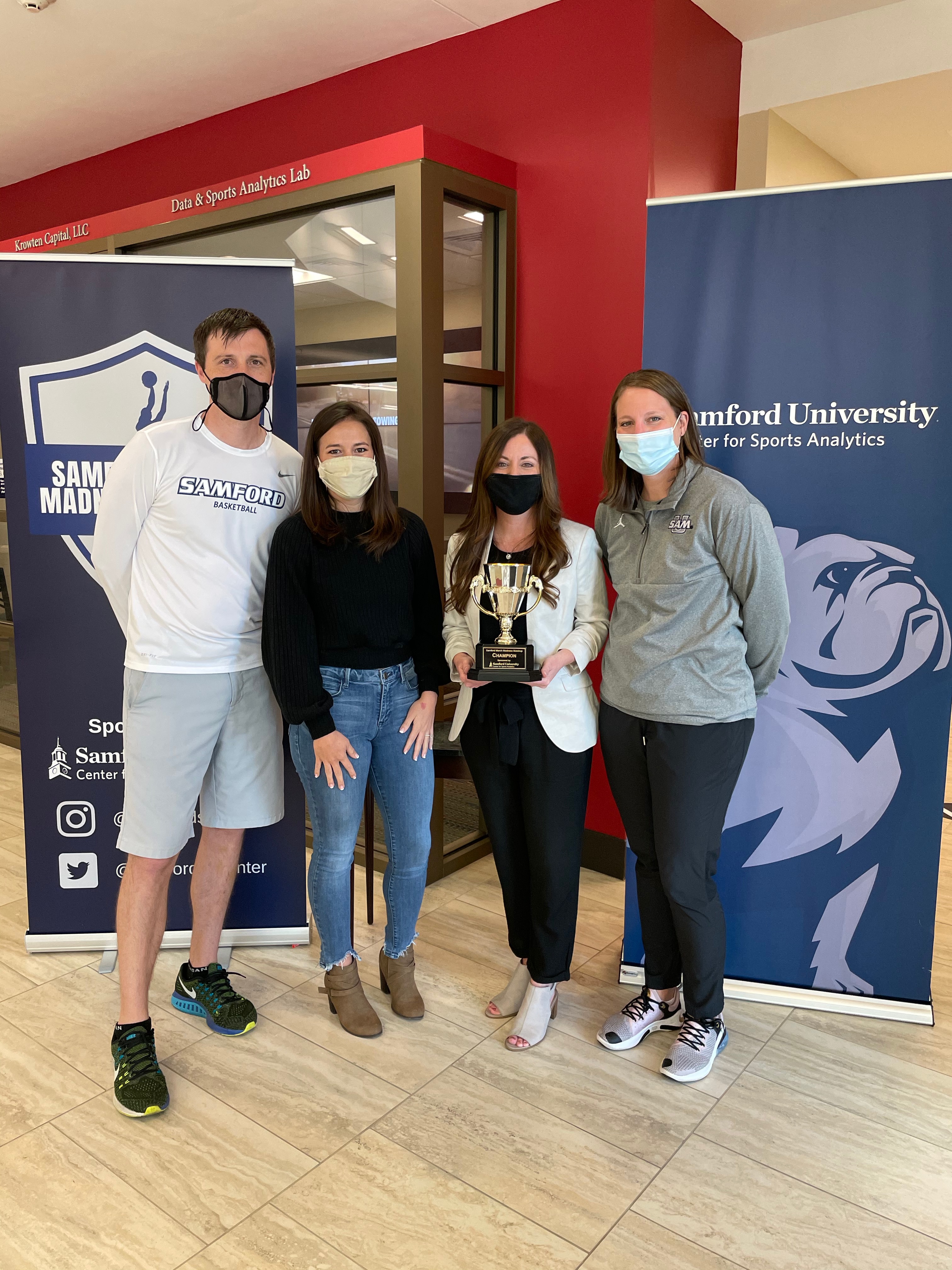 Pictured L to R: Head Men's Basketball Coach Bucky McMillan, senior Mallory Messer, Office of Human Resources representative Janah Brasher, and Head Women's Basketball Coach Carley Kuhns
With the return of the NCAA Division 1 Men’s Basketball Tournament, March Madness bracket challenges were buzzing once again. In a year filled with separation, Samford business student, Mallory Messer, sought out to bring the campus together through a friendly, virtual March Madness competition. Messer, a marketing and management major with a focus in sports marketing, launched the Samford March Madness Matchup with the campus community in mind.
The campus-wide bracket challenge, sponsored by Samford’s Center for Sports Analytics, was a part of Messer’s senior sports marketing project, but, ultimately, turned into something greater. She said, “I thought this would be a fun way to connect all parts of the university when we can’t [safely] meet together in person. The response to the competition was incredible and it was such a great learning experience for me.”
The challenge brought together more than 70 groups on Samford’s campus including athletic teams, academic and administrative departments, Greek and other student organizations, and more. Even President Andrew Westmoreland and President-elect Beck Taylor joined in on the fun.
Each group or individual created a March Madness bracket through the ESPN Tournament Challenge bracket platform based on the strategy of their choice. Throughout the course of the tournament, the Center for Sports Analytics’ social media channels and website featured posts highlighting updates of the bracket challenge leaders. The Caf and Food Court also served as project partners by hosting the kickoff to the challenge on “Selection Sunday” and showing the games on the screens during the tournament.
In addition to friendliness of the competition, Messer was able to assist the Center in gathering data to better understand the analytical approach in which participants selected their brackets. She did this through individual interviews with challenge participants.
“My favorite interview was with Dr. Mingwei Sun who is a mathematics and computer science professor. He downloaded the data of all the teams and focused on the two aspects he thought mattered most: player experience and defense,” she said. “Though his department did not win the bracket challenge, he did predict many upsets including Oral Roberts over Ohio State, Abilene Christian over Texas, and Syracuse over both San Diego State and Western Virginia. The data model to create a perfect bracket has not been found, but I enjoyed hearing the different theories that led to small successes.”
Ultimately, it was Samford’s Office of Human Resources who claimed the victory. Staff members were presented with the inaugural trophy by head men’s basketball coach Bucky McMillan and head women’s basketball coach Carley Kuhns. “Although Dr. Westmoreland and Dr. Taylor were tied for fourth place up until the championship game, I am thrilled for the staff members in human resources who took home the inaugural Samford March Madness Matchup trophy,” Messer said.
Messer will graduate in May 2021, but plans are already in the works to continue what she started during next year’s tournament.
“I am very proud of Mallory and her work to initiate this project,” said Darin White, executive director of the Center for Sports Analytics. “Not only did she knock it out of the park for her final sports marketing project, but she offered a ray of sunshine on our campus by bringing our community together through this competition. I look forward to seeing our sports marketing students follow her lead and keep the competition going next year!”
The final bracket challenge leaderboard may be viewed here.
Samford is a leading Christian university offering undergraduate programs grounded in the liberal arts with an array of nationally recognized graduate and professional schools. Founded in 1841, Samford is the 87th-oldest institution of higher learning in the United States. The Wall Street Journal ranks Samford 1st nationally for student engagement and U.S. News & World Report ranks Samford 37th in the nation for best undergraduate teaching and 97th nationally for best value. Samford enrolls 5,758 students from 48 states and 22 countries in its 10 academic schools: arts, arts and sciences, business, divinity, education, health professions, law, nursing, pharmacy and public health. Samford fields 17 athletic teams that compete in the tradition-rich Southern Conference, and ranks 3rd nationally for its Graduation Success Rate among all NCAA Division I schools.
Marketing and Communications Manager
Morgan Black
mblack3@samford.edu
205-726-4753