Long Suffering is defined by Merriam-Webster Dictionary as “showing patience in spite of troubles; patiently enduring lasting offense or hardship.” Sports fans aren’t known for being long suffering. When teams suffer through a tough patch “bandwagon fans” tend to bail while only the most ardent fans faithful continue to spend the money to attend every game. It’s not uncommon to see attendance fall off by 20 to 30 percent during a losing season.

But not in Ann Arbor! Of the Top Ten Teams for College Football Average Game Attendance (see table below) only the University of Michigan produced a losing record and failed to get a bowl bid. Despite the poor season, Michigan fans almost equaled arch rival Ohio State’s numbers and they averaged close to 30,000 more fans per game than cross state rival Michigan State.

What can a sports property do to develop a long suffering fan base? It’s an important question for an industry that is so dependent on gate revenue as its primary revenue stream. 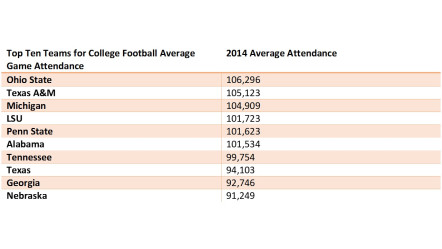