College Football Ticket Sales: Not a “One Size Fits All” System

Published on September 2, 2015 by Lauren Caballero   Share this on:

Pricing strategies for college football ticket sales in not a ”one size fits all” system. Schools throughout the nation have conflicting opinions on the best ways to push ticket sales and drive revenue. With the FBS football attendance average at 44,190 in 2014, an all-time low since peaking in 2008, ticketing departments are scrambling to find the answers. 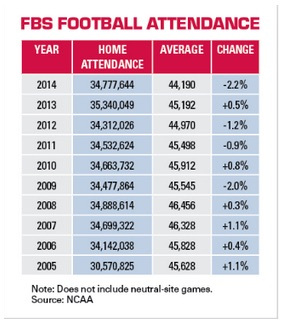 The Price of the Games

This year Rutgers is home to the most expensive single game ticket on the market. For a mere $550, you can snag one of the limited midfield seats to Rutgers game against the defending national champion Ohio State. The Sports Business Journal survey of ticket prices also signified that at least 15 other games this season are selling from $200 and up. Season ticket holders are also seeing prices that are soaring. The “best” season tickets at Utah are about $1,085 per seat. It may seem baffling that these record high ticket prices are hitting the market at the same time that attendance is at an all-time low, but pricing strategies being used have some of the answers. 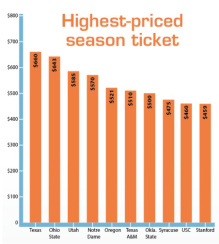 Impact of the Secondary Market

The secondary ticket market such as StubHub, Ticketmaster and others are becoming of great use for colleges using dynamic pricing. Information from the secondary markets is influencing the price at which universities are setting their prices. Using dynamic pricing, schools set their ticket prices based on the caliber of the game, making high profile tickets harder on the wallet to obtain. This dynamic pricing strategy is prevalent at the professional level of sports too, especially baseball with about 81 games a season of tickets to sell. Other schools in the college market, such as Tennessee, are shifting in the opposite direction from dynamic pricing and looking to respect the wallets of fans. Tennessee Assistant AD for ticketing addresses the change saying, “I just don’t think our administration was comfortable with ticket prices that could have been $250 or more.”

Alternative pricing consists of tiered pricing and variable pricing. Some schools, such as Stanford, decrease the price of their tickets every week until a certain time of the year when they will put them back at the market rate. The people who purchase their tickets first have the best opportunity for the most desirable seats. Other schools take an opposing route and set the prices low to reward their early ticket buyers. With this approach, as the hype and game get closer, prices rise.

As the cost of attending a game increases, the value of attending the game will subsequently need to increase as well. Fan engagement is a topic that is hot in the sports industry due to the pressure to make Saturdays more than just the game. In a AECOM study of University of Texas students, research disproved the theory that attendance of students is declining due to the preference to watch at home on a television set or because of the lack of Wifi in the stadium. Emily Golembiewski stated “actually students want the in-person experience. They want to be around other people.” The study concluded that students want more of a place to gather in the stadium and to have an “Austin” feel within the environment. Local bands will now be performing throughout the season and local food trucks will serve food before games in this area. Students are what drive the atmosphere of game days, and students responded that they enjoy sitting together in the stadium. Along with the other 17,000 seats currently reserved for students, a general admission section is being considered.

Companies such as Postano, who was employed for the first National Championship game this year, are employed to focus specifically on enhancing the fan experience. By making the fans a part of the game, it adds value to the ticket. Also, by providing pregame and post game activities for ticket holders, the desire to be present during game day will increase. It goes unsaid that innovation in the game day experience is critical in the midst of this drought in attendance. 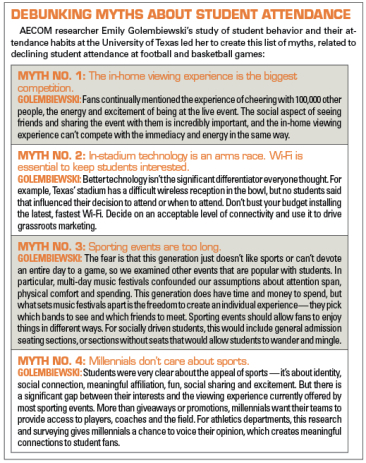