Fantasy sports may be fun, but what does it really cost you? You may think it is worth it to play the game, but after reading this, you might change your mind.

You may think that it does not cost you any money to be a part of a fantasy sports league. I understand where you’re coming from. Miller and Washington (2014) found, “While most fantasy operators previously charged players a fee to play, more leagues are now free.” It is true that most of you do not pay, but obviously not all. In America they found that 34 million adult players pay $468 and order fantasy football merchandise that altogether can cost up to an estimated amount of 5 billion each year. To have a league for the season, money does not seem to matter to those who pay. However, the Fantasy Sports Trade Association (FSTA) returns the winners the initial payment they paid to play and earns up to $1.7 billion in sales at the end of the season from the remaining payments.

Some players are more dedicated than others and enter in fantasy sport contests. Miller and Washington found that people pay as high as $1,300 or as low as $20 in an average contest. This is a huge difference of dedication. However, some players like to play in big money contests. For example, Miller and Washington also found a quote from Bloomberg Businessweek, stating that some “players” enter in Diamond [National Fantasy Football Championship’s Diamond League] and it costs $10,000 to play. People are running at a huge risk, but they obviously have a lot of faith in their league and love the game.

Fantasy players not only lose money, but can also lose a lot of their time. Miller and Washington found a study from Challenger, Gray & Christmas that found that workers were wasting an ample amount of their time to fantasy sports. Checking incessantly cost them “$1.1 billion a week in productivity to fantasy sports.” If the workers did not check their fantasy league a lot, they probably could have earned the revenue for the business. 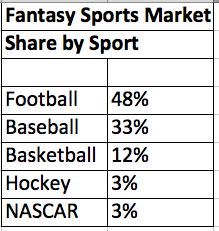 As the chart above demonstrates, football fantasy sport leagues is definitely the most popular fantasy sport and could possibly gain more “players” in the future. As stated before, 34 million adult players played in 2014, but there is always a possibility it could grow. However, it could negatively affect our money and time even more. The loss of $1.1 billion could easily increase or put a place out of business as more people join a fantasy sports team. One can infer that for some people it can be an addiction to join a fantasy sports league. Potentially they could lose their job and income to bring home to their families. It is obviously not worth the risk to join and potentially become addicted.

Players signing up for the Diamond League are giving up $10,000 to play in a league that they are more than likely going to lose. Over the years, players that may be addicted to fantasy leagues could potentially go into debt because not all are going to win. The leagues are very risky and stressful because they have to play their cards right with the players they pick to be on their league. A prediction is that it could be a different form of gambling. For some leagues, like the Diamond League, they are giving away money to try to win more. The players are the cards. The more people that join these leagues, the more people to potentially go into to debt and develop a gambling problem.

For Better or Worse?

Fantasy Sports could potentially grow, but is it truly for the best? It is a fantasy for many people to join, but that does not always necessarily mean that once they wake up, it will not cost them or others for the worst.