MLB and the Glass Ceiling: Will it be Shattered?

In a day and age where the National Football League just hired its first female coach and official and the National Basketball Association hired its second female coach, sports fanatics may wonder – will Major League Baseball follow in the NFL and NBA’s footsteps, or will women continue to have no place in the MLB? This is not to say the MLB does not allow women in its ranks at all; in fact, women made up 30 percent of the MLB Central Office staff in 2013 according to research done by The University of Central Florida’s Institute for Diversity and Ethics in Sport. However, this marks a 5.6 percent decrease from the previous year and the lowest percentage of females in the MLB Central Office since the 1990s.

MLB Compared to the Other Top Revenue-Generating Leagues in America

The NFL lags just behind the MLB, with 29.3 percent of office management in the league’s office consisting of women in 2013. Unlike the MLB, however, this marks an 8.3 percent increase from 21 percent for the NFL in 1995 opposed to a 24 percent decrease from 54 percent in 1995 for the MLB.

With a rate of 40.9 percent of women in the league office in 2013, the NBA leads the three most revenue-generating leagues in America in placing women in the league office. Although 40.9 percent marks an 8.1 percent decrease from the high of 49 percent in 1995, the NBA has had consistent percentages in the forties over the last eleven years. The NFL has also been consistent with percentages ranging from 21 to 29.6 percent from 1995 to 2014.

The MLB, however, is a different story. In 1994, the league had a majority of 56 percent women in the league offices. This percentage has consistently declined, with the exception of 2005 to 2006 when it increased 8.9 percent from 34 percent to 42.9 percent. Since then, the percentage has decreased 12.9 percent to 30 percent in 2013, the lowest it has reached in 25 years. The graph below shows the contrast between women in league offices in the NFL, NBA, and MLB. 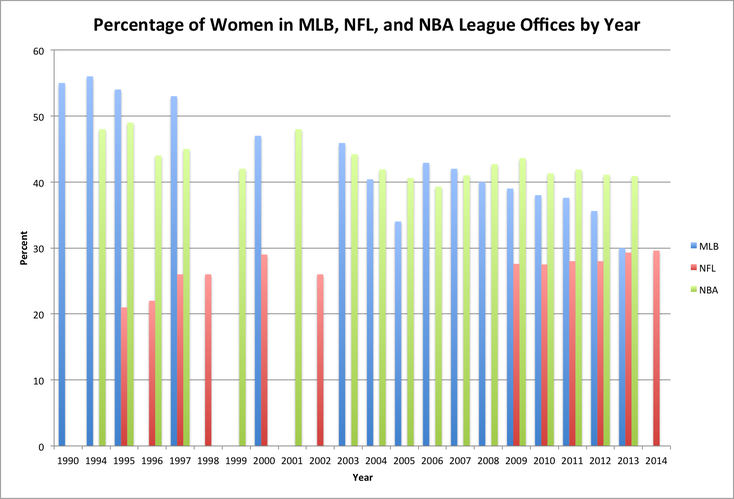 *All league data not available for all years

One is Better than None

Despite the NFL having a slightly lower percentage of women in league offices, the league’s one female assistant coach, Jen Welter for the Arizona Cardinals, and one female official, Sarah Thomas, beats the zero female coaches and umpires in the MLB. The NBA is even further ahead of the NFL, placing two women assistant coaches and multiple women as referees. While the MLB has had women umpires in the minor leagues in the past and “two [women] have umpired major league spring training games . . . no woman has been an umpire for a regular-season MLB game,” and there are currently no women in all 230 umpires in the minor leagues (McCalmont, 2015).

Many speculations exist as to why there is a lack of women in the MLB overall compared to the two other major professional leagues in the United States. It could be that women do not know as much about baseball or perhaps are just not as interested in being involved in the MLB as they are in the NFL or NBA. Figuring out why there are not as many women in Major League Baseball is an obstacle that the MLB has to face in order to solve the problem.

Working Towards a Better Future

The league is making strides in the right direction, however. A little less than a month ago MLB hired the firm Korn Ferry to help candidates prepare for interviews with the league, with “special emphasis to the preparation of minority and female candidates” (Calcaterra, 2015). Still, only time will be the real test to determine if the MLB will be the next major professional sports league to break the glass ceiling.

McGraw, G. (2014, May 14). Which pro sport generates the most revenue? Retrieved from http://www.foxsports.com/buzzer/story/which-pro-sport-generates-the-most-revenue-051414