Savior or Villain: The Impact of Advanced Analytics on Baseball

With the rise of advanced statistical models in the sports industry, should scouts base decisions off these results? It depends on who you ask.

Baseball is a sport that is naturally based off statistics; pitchers’ likelihood of throwing a strike in a certain count, or hitters’ probability of getting on base during a certain situation, are a couple of examples. Professional athletes are becoming statistics rather than people to the organization they are a part of, whether this is in real life or a fantasy league.

Ryan Dunsmore (@d_more55) says, “It [statistical analysis] started with baseball because of the whole revolution of Bill James and how he wanted to find a bigger and better picture of what was happening on the field.” Bill James did not start trying to find this value of individual players until about a decade after statistic were being used to create fantasy games. Around the late 1960’s, there was a change in the overall batting averages for both MLB leagues. Could this be due to the new statistical knowledge? I would like to think so. 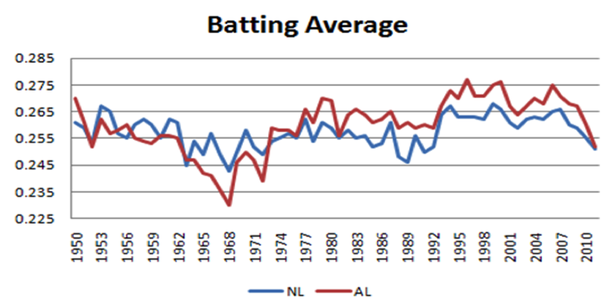 As shown above, the 1970s saw a sudden change in MLB's batting averages. Many say this was due to the emergence of the statistical analysis era.

I still believe the best approach to recruiting involves a balance between stats and scouting. Revealing the statistical outcomes for a certain player, along with the “old-school” approach of recruiting, brings a completely different outlook on scouting and the game as a whole. Raw talent can be noticed by the scouting approach of going to watch the players perform, hoping he has a good game. Incorporating the analysis of the player is the new wave approach that is needed for major league baseball and the performances of the organizations within it. I agree that stats can be a little harsh at times and are not based off the player’s minor offensive or defensive “slumps,” which should remind scouts that the data used is just a prediction. A game full of statistics makes the player and the game itself, technically, just a numbers game. Scouting is based off who can give the organization the best outcomes statistically. This is the way scouting has become, and with a mix of old-school approaches, recruiting players to the MLB has been better than ever.

Making baseball players “just a number” is something MLB teams have had to do for the success of their business. Statistics can give scouts all the data they need about a player in a possible given situation, but instinct and gut feelings are lost with solely this approach. All professional players are essentially business transactions with stats attached, but I’m sure some of them would like to think their pre-game or in-game rituals actually worked, right?

This blog post was written by Samford University student Shelby Scott. You can learn more about Shelby Scott at LinkedIn.

Tracking the rise of advanced statistics in sports. (n.d.). Retrieved September 28, 2015, from http://thelantern.com/2015/09/tracking-the-rise-of-advanced-statistics-in-sports/