Why Colleges Are Worried About Declining Student Sports Attendance

Published on December 9, 2015 by Caroline Novkov   Share this on:

Game day is something that many generations of college graduates remember fondly. However, recent graduates might have very different memories. Thanks to advances in technology, increasing numbers of college students are choosing the comfort of their dorm room to watch games rather than actually attending. This could pose a huge problem for future donations to universities. 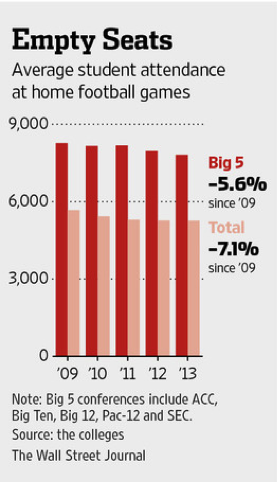 Many give back to their alma mater after they graduate because of the wonderful experiences they had while in attendance and as a way to reminisce on those good times. However, does the fact that he or she was not a regular attender of a football game affect his or her potential as a donor?

There is a direct relationship between the performance of the team on the field, student attendance, and alumni giving (WSJ). The more successful a team is on the field, the more likely students are to attend the game. When students attend games, they create memories and experiences that last long into their graduate lives and as they get older.

So what does this mean for football fans after they graduate?

Students who were passionate fans and embraced the football tailgate and game are more likely to give back in larger amounts to their university (Princeton). They have a positive reflection of their time in college centered on the success and experience of the football team and during a game.

Interestingly, there is a difference in the amount given back with men compared to women. A study done by graduate students from Princeton and Stanford showed that men who graduated from a university with a successful athletic program were likely to give 7% more than those who graduated from a university with an average or losing record within their programs (Princeton). Women, on the other hand, showed no difference in the amount of giving depending on the athletic record of the university.

In the same study, the students found that the football and basketball programs are those that bring in the highest donations when related to a winning record. These sports draw in the largest crowds because of their engagement with the fans through promotions and sponsorships, as well as their popularity across the country. Other sports had little effect on the amount an alumnus is likely to give.

When moving forward, it is important to recognize the significance of a good athletic program for every college and university. The team performance plays a major role in the experience as a student, but also the promotions and atmosphere at a game increases the attendance and engagement a fan has. This, in turn, carries over as the memories for young alumni and the experiences they want to give back too. If a school wants their graduates to give back, make the experience at sporting events one they will hold on to long after they graduate.