The Jarryd Hayne Train: Fast-Tracking Australia into the NFL Market

Jarryd Hayne might just be the most popular Aussie to ever play in the NFL. With his starting job as the San Francisco 49er’s punt returner, as well as back up running-back, the Australian Rugby League convert is electrifying the NFL market in Australia. Since starting for San Francisco this past September he’s shaken up jersey sales, broken through TV records, and caused an all out NFL popularity-blitz in the Land Down Under.

According to an article written by Paul Gutierrez (@PGutierrezESPN) of ESPN.com, from September 10-21 Hayne had the No. 5 top selling jersey on NFL.com. Within the first two weeks of the NFL season, Hayne was already making a huge splash in the NFL’s merchandising market. His jersey was not only the top selling jersey amongst running-backs, but it had also beaten out some of the leagues most notable quarterbacks, namely Aaron Rogers (2014 NFL MVP), Russell Wilson, and even the 49er’s own play caller, Collin Kaepernick.Jarryd’s Jersey-Selling Jolt

The title above refers to a group on Facebook by the same name (Bring the NFL to Australia), which has close to 4,000 likes. The group is advocating having the NFL play a game in Australia, similarly to what they are doing in the U.K. The group states on their “About” page that they are “A page in conjunction with a petition, dedicated in asking the NFL to play a regular season game in Australia…” with a link to the petition listed underneath. There seems to be some serious desire from the Australian fan base to get the NFL to bring it’s game to the Aussie Nation.

In just the past few weeks we have seen incredible growth in the popularity of the NFL within Australia. The jersey sales were just the beginning. What is most incredible was that Jarryd Hayne’s first game in the NFL, 49er’s vs. the Vikings, was the highest NFL related TV ratings in Australia that ESPN had ever seen, beating out last year’s Super Bowl by a margin of 8,900 viewers. According to the article by the Associated Press (AP) these numbers had come from a pay-per-view channel in Australia, which did not even include the numbers from the channel that had acquired the rights to freely air all of San Francisco’s games this year. If you were to include all of the houses that had access to the game for free, the number would probably increase exponentially.

Now, expanding the evidence from a recent basis to an annual one, the sports data analytics company, Repucom, recently published a study on the NFL’s growing influence abroad. The study titled “International Appeal: The Rise of the NFL” lists research done in several nations throughout Europe, Asia, Africa, and South America. And of course, one of the nations that made the list: Australia. 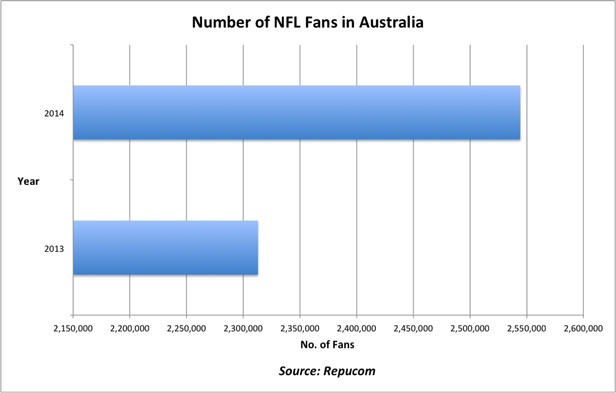 The evidence found in their research on Australia shows that interest in the NFL is steadily inclining with a growing fan base. The numbers show that within the last year (from 2013 to 2014) the amount of people in Australia that consider themselves a fan of the NFL has increased by over 140,000 people (which is almost an entire percentage point of the Australian population as a whole). And now considering that the Australian population has a celebrity figure, Jarryd Hayne, in which they can find true national pride within the league, I would estimate that that number is only going to increase as we enter into the 2015 season.

Written by Corey White (@cwhitesports). Corey is a current Junior Marketing Major with a Concentration in Sports Marketing at Samford University.