Who Had the Greatest Influence on Which Team You Support?

Researchers asked who had "the greatest single influence" on your first choice to become a fan of your favorite team? Here is what they found:

So why do dads have so much influence on our sports fandom? Robert Krulwich with NPR says its because its one of the only ways kids can emotionally connect with their dad. "Dads are more emotionally remote than moms, except when they're watching sports, and that's the crack in the ice that kids naturally choose to exploit. If Dad laughs, cries and high fives about the Red Sox, his kids are going to use the Red Sox to laugh, cry and high-five with him."

Stay tuned for more.... several of my students are working on research that further digs into this topic and will be presenting their findings in the days to come. 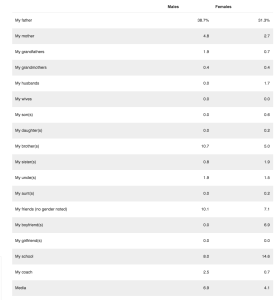 How We Become Sports Fans: The Tyranny of Fathers, by Robert Krulwich, retrieved from NPR.org.