Will the WNBA Survive Until Its 25th Birthday?

The WNBA is going into its 18th season and things have not been looking good for them. Over the past years the WNBA has been taking loses in fans and sponsorships but recently has picked up in both areas. Will this be enough?

Positive moves for the WNBA

Recently the WNBA has signed a television deal with ESPN. The agreement is worth $12 million annually and continues until 2022. The deal will keep WNBA games on ESPN, ESPN2, and ABC and will bring in $2.6 billion per year over the nine year agreement. This is a positive step for the WNBA which allows them to expand salary caps. 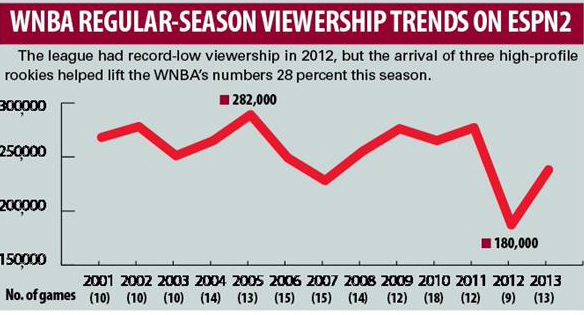 As can be seen in the above graph, these changes have helped the WNBA reverse the negative viewership trends. But will it be enough? Only time will tell.