According to ESPN, NFL Commissioner Roger Goodell said that he is "optimistic the league will return to Mexico City in the years ahead," adding that "This is a priority for us. We see the passion that's happening here and the fan's interest in this game continue to explode. We want to feed that."

A deep dive into social media data from over 500,000 people in Mexico indicates something very different from an "explosion" of passion for the NFL. Samford University’s partnership with Affinio, a social media listening company based in Canada, allowed us to run a detailed study on the 20.6 million followers of the NFL on Twitter. The Affinio analysis, based on hundreds of millions of social media data points, provides a richer, more rounded view of how the NFL is perceived in this part of the world than traditional survey research methods employed by Nielsen and others. By analyzing how millions of people are connected, instead of what they are saying, we are able to understand the entire Mexico NFL audience.

Our analysis reveals that approximately 564,000 people in Mexico consume NFL content on a regular basis. In addition, we found that almost 70% of these people are male and the vast majority (56.8%) are between the ages 25 to 34. A deeper dive into their social media data reveals that the NFL has a long way to go to challenge for sports supremacy in Mexico.

What NFL teams do they track on social media?

The Affinio tool determined that 39 sports teams show up in the top 1000 most relevant social media accounts for people interested in the NFL in this part of the world. Not surprising, the top 22 sports teams are soccer teams. Four NFL teams made the list. The NFL team with the highest relevancy is the New England Patriots followed by the Dallas Cowboys. The other two NFL teams to make the cut were the Denver Broncos and the Pittsburgh Steelers. As a point of comparison, the Mexican Men's National Soccer Team had a relevance score over 10 times higher than the top NFL team. 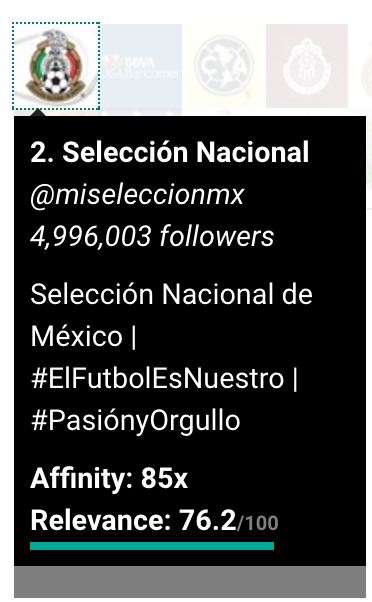 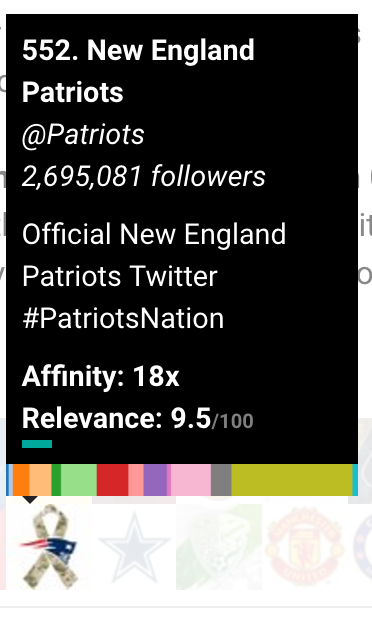 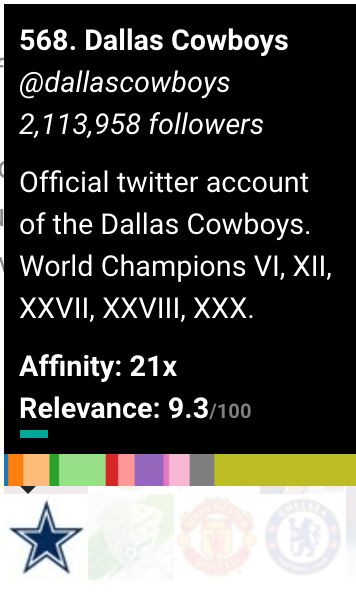 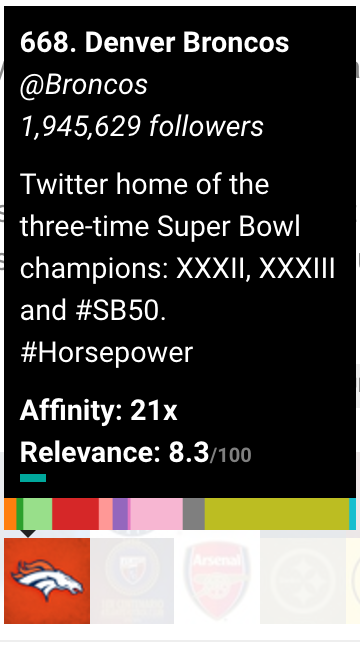 Interestingly, these two NFL teams have higher relevance with this audience than six non-Spanish culture teams of Manchester United, Chelsea, Arsenal, Manchester City, Bayern Munich and Borussia Dortmund. Red Bull Racing was the only non-NFL or soccer team to make the list. It is also interesting to note that no NBA or MLB team made the list.

What NFL players do they track on social media?

The NFL fared even worse when it comes to the specific athletes followed by people interested in the NFL in this part of the world. There were 128 “sports stars” accounts that made the Top 1000 most relevant accounts for this group. Not a single NFL player made the list. Over 95% of the people on the list were soccer players from Mexico to Germany to Brazil (even Pele made the list). The NBA had three players on the list (Kevin Durant, Kobe Bryant, and Shaq). Only two female athletes made the list (Maria Sharapova and Paola Espinosa). Other sports represented on the list included boxing and Formula One.

In summary, our analysis reveals that the NFL has a small, niche following in Mexico. Even among those that regularly follow the NFL in Mexico, soccer is still their favorite sport by a long shot.