Breakdown of Professional Sports Salaries and its Issues 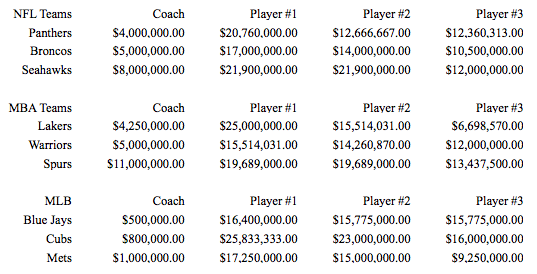 Unlike most players’ contracts, coaches’ contracts are kept secret. It is possible that the numbers are off a little. Regardless, the top coaches of the NFL do really well.

Andrew Powell-Morse (@Andrewpomo) and Brett Cohen (@brettcoh) at BestTicketsBlog made two charts that reveal how little the NFL players make. 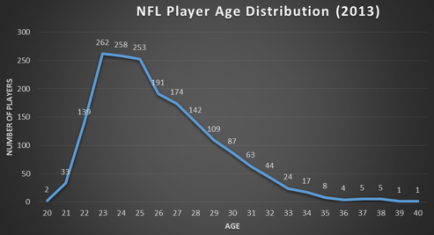 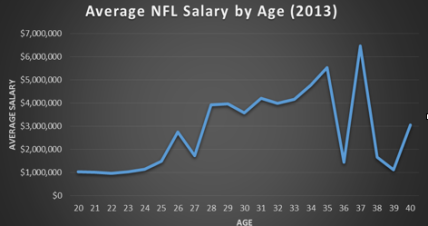 Most NFL salaries do not rise until most players have left the NFL at the average age of 30. 70% of NFL players are between the ages of 22 and 27. Players in this group earn less than the NFL average overall. The highest salaries (above $4,000,000) aren’t given until the age of 35. There are very few players under the age of 32 who still play in the league. By the time most players are making the big bucks, there are very few in the league left who are still playing.

The MLB does quite a good job with its salary process. The MLB has a specific process of deciding how to pay its players. MLB uses a salary arbitration system known as the “final-offer arbitration.” Players are separated into these three different categories; (1) pre-arbitration players, (2) players eligible for salary arbitration, and (3) free agents. These groups are based on the player's service time. Also, there are another class players called "Super 2s". A Super 2 is a player who has had two and three years of play time. Based on the player’s classification and stats, salaries are decided.

So what can we do with all of this information? I believe that professional sports teams need to recognize how little they are paying their players and coaches compared to the amount of money they generate through games and promotions. The NFL and MBA can learn a thing or two from the MLB.