With sport's biggest spectacle looming only a few days away, the excitement is radiating more than ever. The main buzz about this monumental Super Bowl 50 is the rivalry that will take place between Super Bowl vet Peyton Manning and Super Bowl rookie Cam Newton. The question is: Who will dominate the stage?

Cam Newton is a football god in what has shown to be the college football capital of the world. On top of that- he is only 26 six years old, five years in the NFL, won a Heisman Trophy and national championship at Auburn, was the league's No. 1 pick and Rookie of the Year in 2011, and likely will be named the NFL most valuable player this year.

His unrivaled power and charisma makes for him to be one of the most intriguing players in the league. Put him on the biggest sports stage in the U.S., and there is sure to be a good show.

With the Panthers at an overwhelming 17-1 record for the season, the bandwagon pulling for Cam will be just another aspect that will make this game so interesting.

How could Cam Newton help make this one of the most viewed Super Bowls in history? 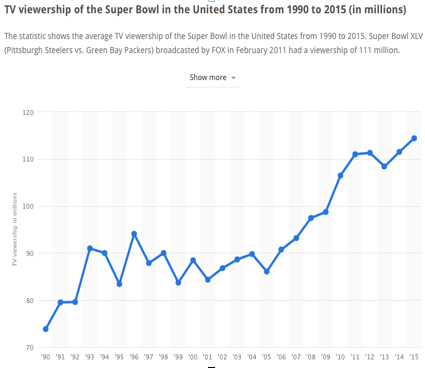 Throwing a new powerhouse like Cam Newton into the mix makes for an NFL brand-building dream.

An ESPN marketing survey stated that Newton was only trailing in NFL endorsement rankings behind No. 1 Peyton Manning. However, the hype surrounding Cam Newton surpasses Manning by leaps and bounds- much so assumingly due to his incredible Auburn career.

Super Bowl viewership has increased by 6 million viewers just in two years. This with repeat winning Super Bowl quarterbacks such as Tom Brady.

At this rate of increasing viewership, Super Bowl 50 featuring a loved veteran quarterback and a new powerhouse quarterback could make for a record breaking game.

http://www.foxsports.com/nfl/story/new-england-patriots-tom-brady-denver-peyton-manning-rivalry-fun-facts-012116 [Link broken as of 8/10/2020]