Does Winning Really Make a Difference for the Chicago Cubs?

As the game of baseball is in the midst of the 112th World Series ever played, one number has been a greater topic of interest more than any player or stadium. That number is 108. It has been 108 seasons since the Chicago Cubs have won a World Series and they have not even appeared in the Series since 1945, 71 years ago. In fact, the last time the Cubs won, sliced bread, crossword puzzles, and the state of Arizona had not been invented. One unfamiliar with Major League Baseball after hearing these statistics would immediately believe the Cubs are on the brink of going out of business. However, the exact opposite is the case. In fact, according to Forbes, the Cubs were valued as the fourth-highest team in Major League Baseball at $1,800,000. As shown in the graph below, only the New York Yankees, Boston Red Sox, and Los Angeles Dodgers are valued higher. 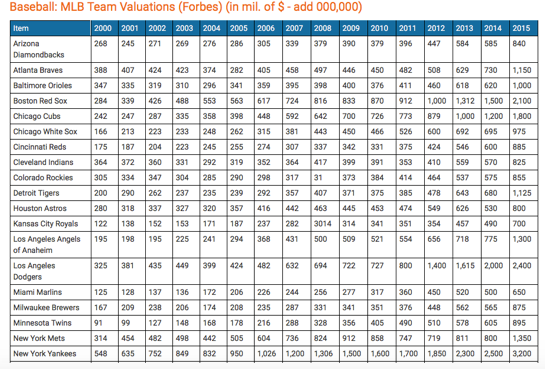 All three of those teams have had a minimum of six World Series titles in the last 108 years. So how do the Cubs manage to remain one of the most valued franchises in all of the MLB and sports while enduring such a horrific championship drought? The answer is defining the game day experience in a way that is different from everyone else.

In a day and age where the sporting experience is becoming increasingly modernized to enhance the in-game experience, the Cubs have hardly made any renovations to their 102-year old stadium. Up until the Cubs recently reconstructed some minor aspects of the ballpark, they had spent a measly $250,000 in construction, according to FromThisSeat.com. On the other hand, the Miami Marlins recently spent $550 million to modernize their stadium and enhance the game day experience as a result. Although the Cubs may have a significantly older stadium, they still are valued at $470 million more than the trendy Marlins. They have done this by establishing a timeless stadium that resonates with baseball fans across the U.S. and even the world. As a result of the close quarters of Wrigley Field, fans are brought closer to each other and players more so than any other stadium. Home run balls hit by the opposing team have been thrown back since the late ‘60s and the iconic trifold cardboard scorecard has connected fans at Wrigley and beyond. All these factors have made Wrigley Field a baseball icon and contributed to the Cubs’ incredible game day experience.

At first glance, Wrigley Field is cramped and serves food that is well below current standards at most ballparks. Wrigleyville’s bar scene is also far behind the times and most Cubs games are on local TV or cable only, making them inaccessible to people nationwide or even to the city of Chicago. However, the Cubs game day experience stretches far beyond the stadium itself, which is what makes it so great. All kinds of different bars allow thousands of fans to be a part of the experience without ever buying a ticket. Local businesses will also look for a way to take part in the action in any way they can. The Cubs have defined the game day experience differently from everyone else as it is not just inside the park, but takes over the entire neighborhood. Rooftop clubs offer some tickets across the street from Wrigley. Batted balls regularly leave the confines of the field, leaving eager young fans waiting outside the stadium anxious to catch foul balls. Freelance peanut vendors and street musicians roam the streets of Wrigleyville hoping to make a few bucks. Local homeowners even rent out parking spaces for Cubs fans. The Cubs’ game day experience is so great because it stretches beyond Wrigley itself. It is an experience that takes over the city of Chicago.

Despite 108 years of a World Series drought, the Chicago Cubs have found a way to keep fans engaged and loyal. Teams around all sports can learn from the Cubs’ ability to turn a piece of property into a timeless stadium and engage all residents of the city on game day. If teams are able to replicate this model, wins will play a significantly less role in the importance of selling tickets and driving revenue.

Savage, Bill. Society For American Baseball Research. “The Cubs Fan Paradox: Why Would Anyone Root For Losers”. Retrieved From: http://sabr.org/research/cubs-fan-paradox-why-would-anyone-root-losers

Useem, Jerry. The Atlantic. “The Curse of the Loyal Sports Fan”. Retrieved From: http://www.theatlantic.com/magazine/archive/2016/07/the-curse-of-the-loyal-sports-fan/485594/