eSports: A Market Preparing to Explode

For years, there has been an ongoing argument of whether or not we should consider eSports alongside traditional sports. Opinions have ranged from no because of a seeming lack of physical performance to yes based purely on the competitive nature of the games. However, one thing that cannot be disputed by either side of the argument is that eSports have made it big, and are only getting bigger.

From humble beginnings of playing in small hotel ballrooms, to selling out 40,000 seat World Cup stadiums, the in house viewership of eSports has grown rapidly since the start of 2000. Of course, that number only covers viewers who go to the event. Most fans of these events cannot or do not travel to the physical destination but instead watch from homes or parties on online streaming services like Twitch.

Twitch, a company recently purchased by Amazon for nearly $1 billion, has over 100 million unique visits to its website every month. In fact, totaling online views with those live at the event, the League of Legends world championship held in Korea last October had an audience of over 27 million, more than the Masters, NBA Finals, or MLB World Series. This audience is primarily comprised of males age 21-35, which admittedly I as a college senior fall into. I will also admit that I have taken part in watching eSport events and I, like nearly every other person in that demographic who has watched eSports, will tell you that its because the games are fun. Watching eSports has many of the characteristics of watching any other sport: the games are exciting, there is a lot of passion, and ultimately is a sport that truly reaches worldwide. 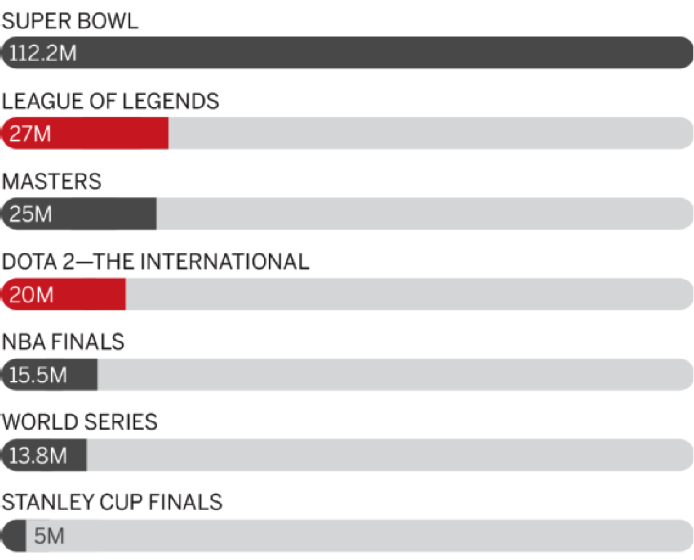 What This Means for Sponsors

Along with the viewership and access to a coveted audience in Millennials, there is also a surprising amount of money in eSports. Currently the economy of eSports is sitting at around $749 million, but estimates from Stephanie Llamas at SuperData say that eSports markets will grow to $1.9 billion by 2018. Llamas’ research also shows that around 77% of the money in this market is from sponsorship. In fact, some big players are already working in the industry. Coca-Cola has been involved with League of Legends, the most popular eSports title world wide, for the past two years and is still increasing their efforts. Just last month, Coke debuted a weekly show with eSports website IGN that is streamed on Twitch and acts as a news program for a variety of eSports titles. Intel has also done well in the market by being the longtime title sponsor of an eSports tournament organization the Intel Extreme Masters. While some of these efforts may seem odd, this is what is required to reach the younger demographic of eSports. Morgan Howell of Octagon says it very well, “This is a skeptical audience that grew up on the Internet with ad-blocking software. To get their attention, you have to be a brand that makes their experience better.” While this might make initial marketing and sponsorship difficult, tapping into a fairly exclusive and young market will certainly make the investment worthwhile.

If reading this short blog post has somehow gotten you excited for the future of eSports, you will need to move quickly if you wish to act. Many of the typical players when it comes to sports are starting to see the value and opportunity in eSports and therefore are beginning to act. Mark Curban has begun investing in a company called Urkin which is developing a betting system for eSports. Vulcan.com and AlphaDraft have already become popular as a monetized fantasy option for eSports similar to FanDuel. Finally, investment groups containing and headed by the owners of professional sports organizations have already started eSports teams; a group including the co-owner of the Memphis Grizzlies Steve Kaplan purchasing eSports franchise Team 8 is the most recent show of this. With a broad and wealthy future ahead of eSports, revisiting the old argument of whether or not it is a sport will be much more interesting when eSports could be a nearly $2 billion industry in 2018.

This blog post was written by Samford University student Lincoln Honts. You can learn more about Lincoln at LinkedIn.