Female Athletes: Going for the Gold

Women in sports are influential leaders in society and are positive role models to many people around the world. In today’s society, there are many positive female athletes that are making an impact in the world. A big supporter of women in sports is the Olympic games that take place every four years. The International Olympic Committee (IOC) has made it one of their missions to promote women in sports and focus on how to improve equality. The XXI Olympic games begin this August and has promoted many female athletes’ success stories.

The first time female athletes competed in the Olympic games was in 1900 in Paris. Twenty-two women out of 997 athletes competed in five sports: tennis, sailing, croquet, equestrian, and golf. The IOC states in their charter that their role is “to encourage and support the promotion of women in sport at all levels and in all structures with a view to implementing the principle of equality of men and women.” Female participation in the Olympics has increased steadily throughout the years, and women account for more than forty-four percent at the previous Olympics of 2012. The graph below shows the change in participation percentage out of all athletes at the games over the years. 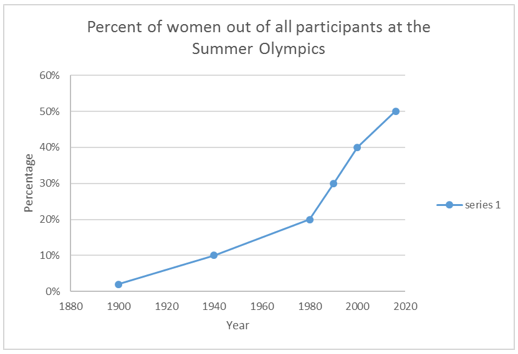 At the 2012 Olympics, female athletes in the United States earned more medals than males in the United States or any other country. The 2012 games were also the first Olympic games in which there have been more female Olympians than males, with the American women winning fifty-eight medals and forty-eight for the men. Women also took home the most gold medals as well, with women earning twenty-nine medals and men earning fifteen. 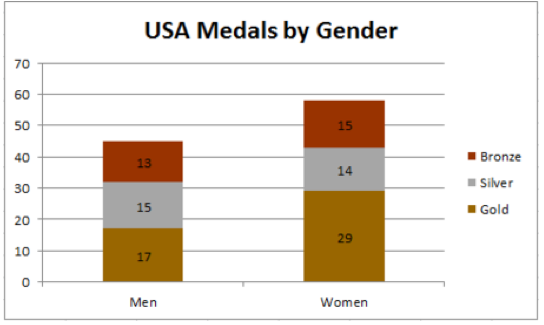 In the upcoming Olympics, there has been much media attention on multiple female athletes. Serena Williams is one example of a female athlete role model to many people around the world. Sports journalist Tolly Taylor (@TollyTaylor) described Serena’s career by saying, “Williams has been etching her place on the Mt. Rushmore of sports since she turned pro at 14 in 1995.” She recently won her twenty-second Major title at Wimbledon, one of the most competitive competitions. Last week, Serena Williams was asked what she thought about being "one of the greatest female athletes of all time." She responded, "I prefer the words 'one of the greatest athletes of all time.'" Her response is just one way that Serena promotes female athletes and their importance.

Another female athlete to watch at the summer Olympics is United States soccer player Alex Morgan. Morgan is a big supporter of equal opportunities for women and currently is in the middle of a lawsuit fighting for equal pay for the US Women’s National Soccer team as the US Men’s National Team. Williams and Morgan are two athletes that inspire many around the world on and off the court with their talents and their fight for equality.

A recent video campaign from NBC promotes the women of Team USA at the 2016 Olympics and has the catch phrase of “Salute to women.”

The video highlights American female athletes competing and receiving their medals at the 2012 Olympics. This video is used to inspire others to chase their dreams and to support their fellow female athletes.

Female athletes are influential in today’s society and the future of sports for females everywhere. Female athletes should be an inspiration to everyone around the world because of their strength, determination, and fight for equality that is still not over. The Olympic games are sometimes considered one of the best sports competitions in the world and the IOC has a lot of focus on equality for women in sports.