Living in a Fantasy World

The participation of fantasy sports has exploded over the last seven years, as shown in the graph below. This is creating more opportunities for fans to get involved, as well as for companies to facilitate and make a profit off of these leagues. 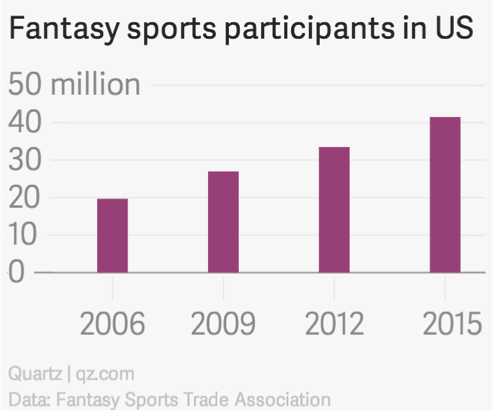 But why have so much passion for a fantasy world?

By interviewing a few representatives from the millions of people playing fantasy sports, you hear two primary themes.

Sports fans are very competitive by nature. Sports are an industry that has excelled at instilling a passion in its fans to feel an emotional connection, even though they are off the field. Within this passion comes the competitive piece. They want their team to be the best, most talented, and consistent team in the league that it plays. Competitions like Fantasy Football allow fans to compete against their family members, friends, and coworkers. This competition allows people to connect no matter how close or far away they are from each other.

We All Need a Hobby

Fantasy football is seen as a hobby. Beyond the leagues, the amount of time that fans set aside to talk, write, and think about their team is considerable. On average, fans spend around three to five hours during the week, which does not include the time they spend actually watching games, focusing on their team line ups and projections.

So why live in this fantasy world? It gives fans a chance to be a part of something bigger than themselves. It allows them to feel as if they are in control of a team, a chance to pick players and engage their friends and other fans in friendly competition.