NBA All-Star Festivities: Helping the NBA Where It Hurts the Most

Published on February 11, 2016 by William David Smith   Share this on:

Recently, the NBA announced the starting lineups for the East and West All-Star teams. The East is comprised of Kyle Lowry, Paul George, Dwayne Wade, Carmelo Anthony, and LeBron James; while the West boasts of Steph Curry, Kobe Bryant, Russell Westbrook, Kevin Durant, and Kawhi Leonard. The All-Star game and the other festivities will take place February 12th-14th, a time when the NBA has little draw. The excitement and buildup for the start of the season has worn down, teams are playing fairly routine basketball, and the playoffs are two months down the road. It is a time when there is simply no excitement pulsing through the league. All-Star weekend changes that.

An important aspect to the success of the All-Star game, on a “ticket selling” level, is location. In the recent past, the All-Star game has been held in Los Angeles in 2011, Orlando in 2012, Houston in 2013, New Orleans in 2014, and New York in 2015. As shown below, in the larger cities, such as L.A., New York, and Houston, sports are big industry and the market is saturated with people willing to pay top dollar to see the All-Star game. In cities like Orlando and New Orleans, which are less sports oriented, the demand is not as high, and tickets and attendance are typically lower (2015 NBA). This year, Toronto, Canada, is home to the All-Star weekend. If this seems an odd location, it is. Given that it is not in the United States and a number of people will not be able, nor will they want, to attend given the travel between the two countries. 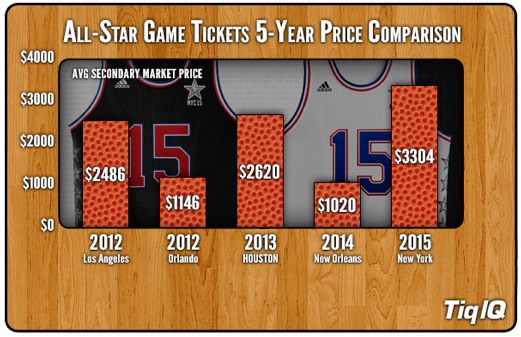 Despite the location, this year’s All-Star weekend will have a number of headlines that will attract attention. For example, this will be Kobe’s last All-Star game before his retirement. One cannot ignore the fact that Kobe had the most All-Star votes for either conference with almost 1,900,000, beating second place, Steph Curry, by almost 300,000 votes. Another headline is Kevin Durant and Russell Westbrook taking on LeBron James and Dwayne Wade in a rematch from the 2012 NBA Finals. On top of this, surely sharpshooting point guard Steph Curry, along with other players such as J.J. Reddick, will put on a show in the 3-point contest. Of course, the dunk contest will entertain as always, and the rookie showcase gives everyone a chance to catch a glimpse of the future of the NBA. The skills challenge is a different story. Due to its strange and almost unwarranted place in the Saturday night festivities. Still, the All-Star game and the weekend as a whole focus upon selling tickets and helping the NBA hobble through the cold winter months. It is also a reminder to some of the looming end of the season.

The All-Star game has been an annual event for the past 65 years. Although, the first game fulfilled a completely different purpose. The game now serves as a “winter break” of sorts that allows teams to divide the season in half while focusing their eyes on making the playoffs. It also, more importantly, gives fans something to look forward to in a time period where nothing noteworthy is occurring. This puts the whole sports world on notice of the NBA and allows fans, players, and teams to generate excitement for both the game itself and the rest of the season.