The decline in NFL ratings has become a huge news story over the last three months and has been a mystery for the media and the NFL. Pundits from the WSJ, Forbes, USA Today, etc. have written dozens of articles with theories as to what is going on.

A new study from Leger, The Research Intelligence Group, suggests that player protests are having an effect on NFL viewership this year. "The study found that 16% are watching less with nearly two in five (39%) of those watching less citing the protests  such as kneeling during the national anthem  as a primary reason for tuning out." (Cynopsis Media). These numbers back up the claim made by many that Colin Kaepernick's attempt to bring politics into a realm where hundreds of millions of Americans flock in order to escape the highly continuous real world of politics has negatively impacted people's desire to watch the NFL. Interestingly, ratings for College Football has not seem a similar decline which lends more credibility to the Kaepernick theory. 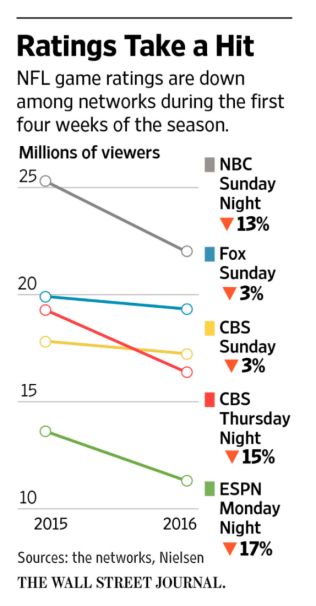 The chart on the left shows that the rating decline through the first four weeks of the season is across all networks and nights that have NFL games. Player protests earlier in the season is still impacting rating into November according to Leger's research.

Among adults 65+, 54% cited the protests. “Months later, this contentious issue continues to impact viewership,” said Lance Henik, Senior Account Manager at Leger. “According to our October poll, the protesting by NFL players during the national anthem was the top reason cited for not watching NFL games as much as last year. These protests really struck a nerve, especially among older, perhaps life-long, fans.”

Some of the other leading reasons cited have been:

(1) The league’s failure to discipline more aggressively players who have engaged in off-field misconduct possibly.

(2) A perception that the league reacts too heavy-handedly in other matters (like #DeflateGate and the Saints bounty scandal).

(3) An intense sense of disdain by NFL fans for Commissioner Roger Goodell.

(4) NFL's reluctance to fully embrace technology in order to get the calls right has led to fan frustrations arising from the sense that what everyone else sees is missed by the refs.

(5) The ongoing desire to expand the NFL’s reach to other countries likely alienates some fans.

(6) Changing viewing habits with the younger generation no longer congregating a television. Instead millions of them (called "cable nevers") are watching on their mobile devises, laptops and social media, like Twitter.

(7) Many members of Generation Z are not "compelled to take the time to witness the flow of a game, the shifts in momentum, the nuances that set the stage for game-changing moments in the fourth quarter. They just want the highlights and the stats, so that they can see how their favorite team and, perhaps more importantly, their fantasy team performed"according to Mike Florio with Pro Football Talk.

(8) Fantasy football has led to less zeal for one specific team and a lack of the us-against-the-world mindset inherent in fans that don't play fantasy football. For example a fantasy football player who is a huge Panthers fan might find himself torn when the Panters are playing the Saints because Drew Brees is on his fantasy team. 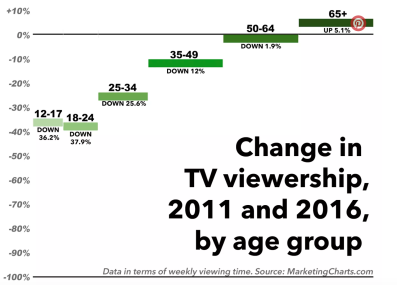 Pundits point to the escalating decline in viewership as you move down in age, demonstrated in the chart to the left, as evidence for reasons 6, 7 and 8 above.

(9) The NFL claims the Presidential election is to blame for the downturn in rating. Personally I found myself wanting to watch more football over the last few months (specifically college football) in order to boost my mood after watching the continuous, classless displayed put on by both major candidates. As an Alabama football fan this strategy has worked well for me so far this season!

(10) The low quality of the early-season games.

(11) The most important player that drives fandom is the QB. The QB factor  is suffering this season, with Peyton Manning retiring and Tom Brady suspend early on, plus many unknown and/or unaccomplished player leading their team at QB.

(12) The concussion crisis has likely caused some fans to feel guilty about watching or enjoying football.

(13 ) In turn, the league’s efforts to make the game safer probably has influenced others who want big hits and who don’t care about the physical consequences to lose interest.

SB Nation, "Why NFL TV Ratings are Down and Why You Don't Have to Care"

Pro Football Talk, "Why is the TV Viewership Down"