Reasons Why the Packers Have the Most Fan Loyalty

Published on November 23, 2016 by Micah Green-Holloway   Share this on:

How loyal are you to your NFL favorite?

If you are not getting 6 teeth implants for your favorite team’s helmet color, marrying your wife partially because her name has your favorite NFL included, meeting your priest for a mass tailgate, or lined your casket with your team’s colors, then how loyal are you really?

Yes, I agree, this is insane, but that is the only way the Green Bay Packer fans know how to show their loyalty. If you are not willing to top this commitment, then it will be hard to top them. Even the legend, Brett Favre states, “There is a connection with the fans here that you can’t get elsewhere, and I played elsewhere." One may question, what’s the prove of their fan loyalty? I have identified a few key factors that shows why the Green Bay Packers have the most loyal fan base. The reasons are as followed: Continuous increase in attendance, Strong Social Media Presence, Highest Female Demographic.

According to SBRnet, the Green Bay Packers’ attendance seems to increase every year. Looking at the statistics, one can see that in 2015, the Packers were 3rd in attendance behind the Dallas Cowboys and New York Giants. This is amazing when comparing attendance from the whole league. To prove that their fan loyalty is strong, you can see from the data that their attendance has increased since 2012. This says a lot about the Packers, their marketing efforts, and the fan base. One could argue that the reason why their attendance has increased for these years is because they have consistently maintained a winning record since 2009. Although this may be true, I have proved additonal reasons to show that their fan base is the best in the game.

The Packers has one of the stronger, if not the best, social media presences in the game. When it comes to building an effective social media presence, it is not all about how much you post content, which is helpful, but it is how well you attract fans and keeping them engaged. 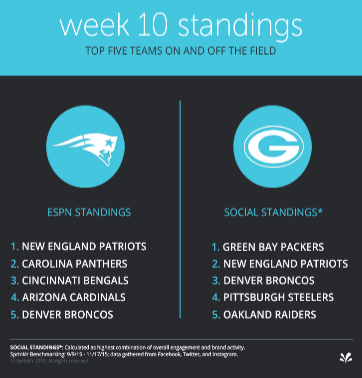 According to Demody (2015), a social media management system that markets, advertises, and research on Facebook, Twitter, LinkedIn, and 21 other channels globally, The Green Bay Packers has the highest social media presence in the league. The content they produce and the engagement with their fans is remarkable, thus the reason why they are considered one of the best social media accounts amongst Facebook, Twitter, and Instagram. Wondered why their social media presence is one of the best in the game? Take a look at my next point.

Along with the Packers’ increasing attendance and strong social media presence, they are also incredibly successful in attracting their female fan base. According to SBRnet, as of 2015, females takes up 37.1% of the total fan attendance. If this is true, why aren’t most NFL teams targeting this demographic. The Packers realizes this phenomenon and take full advantage of it. 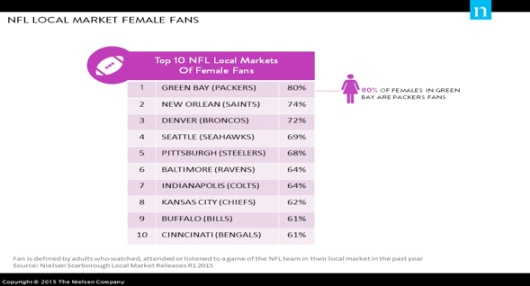