The Challenge that comes with being an Olympic Athlete

Olympic athletes push their bodies to the limit by perfecting their craft and training both muscle and mind. So what do they get at the end of the day besides a shot at winning an Olympic medal for their country? This post focuses on the economics of being an Olympic athlete. What it costs to get to that point, what average athletes and outliers can hope to make, and just how long the golden/monetary glow of glory lasts after retirement?

Here are the seven most expensive events to train for the Olympics for:

This is pretty staggering because for example Olympic gymnasts have to come up with this money for ten to twelve years without knowing if it will pay off or to what degree. “Most Olympians earn nothing for Olympic competition. Many countries’ Olympic teams, including the United States’, provide travel expenses to Olympic competitors, but even these funds don’t come directly from the government, rather a pool of private and corporate donors.” The only direct income Olympic athletes can earn is from corporate sponsorship and medal bonuses. The sponsorship deals work out well for A list stars. The medal bonus payouts given by the Committee to American athletes are $25,000 for gold, $15,000 for silver, and $10,000 for bronze. Several countries have similar payouts, but Russia and Italy are the forerunners. “In 2012 Russia will pay $135,000 for a gold medal, $81,600 silver, and $54,400 for a bronze medal. Italy will pay gold medalists $182,400; the country also paid salaries of $64,000 to its 14 gold medal winners from the 2008 games through this summer’s Olympics.” 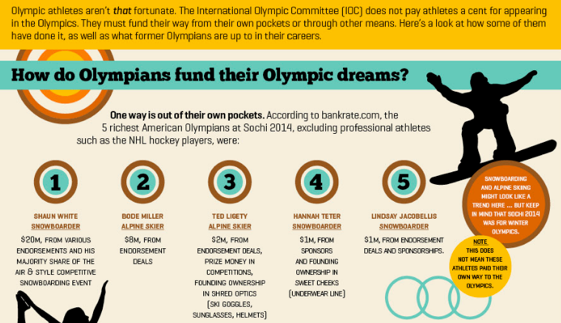 There are definitely outliers just like in anything. Gabby Douglas will appear on Corn Flake boxes and marketers estimated that she will bring in $10 million dollars in the next decade. The five richest American Olympic athletes at Sochi funded their training out of their own pockets. 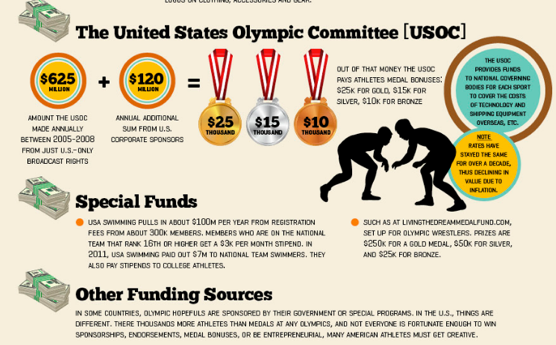 Another interesting fact is that despite the massive amount of corporate investment ($7.38 billion at the London games), stricter regulations are being placed on athletes when it comes to sponsorship. There are “dead periods” where athletes are unable to use social media or appear in commercials that support non Olympic corporate sponsors. The unintended consequence is that these athletes miss out on public exposure for their own personal brands as individuals. This hurts their future endorsements, career opportunities, and lowers the value of their personal brand. Something that for many athletes might end up being their easiest fall back option.

It is quite apparent that being an Olympic athlete is not a goal to be sought after purely for financial gain. These athletes are young and the majority of them have not yet won huge prize collections to fund their own training. That means relying on their own family’s sacrifice, every hour spent at work, and every cut off that much needed paycheck adding to the weight of responsibility. For the Olympian hopeful monetary gain is as elusive as a spot on the podium. The families have to sacrifice, so their children can sink their whole existence into a single craft. The risk is smaller only to the potential reward.

This link can show you what your chances of becoming an olympic athlete is based on metrics like age, weight, body mass index: https://www.theguardian.com/sport/datablog/2012/aug/07/olympics-2012-athletes-age-weight-height