The NFL: Dying or Adapting?

In a day and age where everything seems to be changing rapidly, all sports leagues are being forced to quickly learn how to adapt to the changing culture. A perfect example of this is the big money people are willing to spend in order to take a stab at success. In 2015, Americans spent roughly $50 billion in order to successfully take care of their pets. This is the same amount of money the U.S government pours into the Department of Education in order to hopefully reach academic success. $50 billion is also the amount that television networks and carriers, such as ESPN, CBS, NBC, and DirecTV have committed to the NFL until the early 2020’s to hopefully achieve financial success. However, what seemed like a good investment at the time for television carriers is turning into a disaster as NFL TV ratings are down an entire 11% since week one of this season. Not only are television ratings dying, but so is attendance. According to SBRnet, NFL attendance from 2014 to 2015 also decreased. This graph can be seen below:

If TV viewership and attendance are both declining, is the NFL going extinct? The answer is no, but change has to be made quickly.

First and foremost, the traditional television industry is in decline. TV ratings have decreased forty percent amongst teenagers and viewers in their twenties, which are critical to sports viewership. This is the represented by the graph produced by The Atlantic . 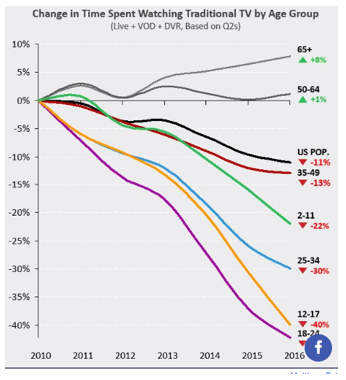 The decline is a direct result of increases in competition and cord cutting. Netflix is a perfect example of this problem as it has added 3.6 million subscribers in the third quarter alone.  If the NFL wants to stop being affected by the cord-cutting trend, it will have to adjust accordingly to the changing landscape of TV as well as the younger demographics’ tastes.

So what does the NFL have to do in order to stop this decline in viewership? There is not one big solution to this problem. Rather, it’s a number of ways that the NFL will be more appealing to everyone, especially the younger demographic that is cutting the cord. One of the first ways to keep the young audience engaged is through allowing the touchdown celebrations to take place. This year, the NFL has emphasized penalties against these celebrations when younger fans love them. If the NFL realizes that the harsh treatment of celebrations decreases fan enjoyment and that it is a fun part of the game, the younger demographic may begin to hesitate before cutting the chord. Another way the NFL can stop declining viewership is through finding viable options to make up for the daily fantasy sports bans. Legislative action limiting FanDuel and DraftKings in many states in addition to the daily ad blitz has taken a toll on NFL viewership. Fans who have money depending on certain games are bound to be more engaged and will watch more. If the NFL can find a way to abide by the law regarding fantasy sports, it can re-engage the fans that have been lost this past year due to the legislative action.

From a political standpoint, it is fair to say that Kaepernick and all NFL players protesting the national anthem is hurting TV viewership. Certain polls support this notion as 32% of respondents in a Rasmussen Poll said they were less likely to watch a game because of the 49ers quarterback. Although the NFL athletes are allowed to take part in protesting the National Anthem, many sports fans believe that athletes get paid millions of dollars to entertain and should not be concerned with informing viewers of political views.

With all that being said, is the NFL a dying game yet? No. But its declines in attendance, and even more so, the viewership is not a good sign. Thankfully for the NFL, the problem is not large enough to where massive amounts of change need to be made yet. However, small adjustments such as allowing celebrations, implementing a new Daily Fantasy Football game involving money, and limiting protests, are all necessary adjustments that need to be made to increase viewership and prevent the NFL from going extinct.

Sports Illustrated. “Power Rankings: The reasons why NFL ratings are down”.
Retrieved From: http://www.si.com/nfl/photo/2016/10/20/nfl-television-ratings-decline-causes

The Atlantic. “NFL Ratings Just Fell Off a Cliff: Why?”.
Retrieved From: http://www.theatlantic.com/business/archive/2016/10/nfl-ratings-just-fell-off-a-cliff-why/503666/