On Sunday, November 6, Real Madrid and Portugal’s Cristiano Ronaldo signed the bottom line of a record-breaking contract with sports giant Nike, Inc. He earned nearly $17.5 million per year in the previous Nike contract; however, this new deal will place him closer to the $1 billion lifetime agreement that Nike offered NBA champion LeBron James.

The two highest paid athletes in the world according to Forbes are Nike’s Cristiano Ronaldo and Adidas’ Lionel Messi. The soccer footwear, apparel and equipment industry is a constant back and forth between Nike and Adidas. This Nike deal with Ronaldo is another tactic to help push Nike toward the lead it seeks in an international soccer market. 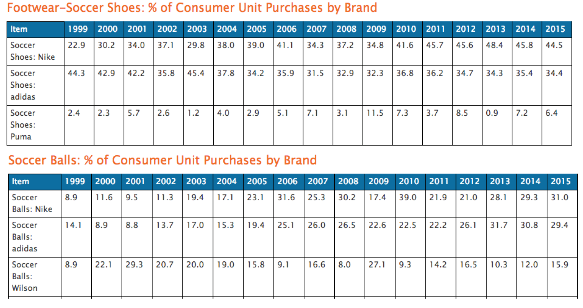 In addition to his new Nike contract, Ronaldo also signed a new deal with the iconic soccer club Real Madrid. The contract runs through June 2021, extending Ronaldo’s previous Real deal, which was set to expire after the 2017-18 season. Ronaldo’s annual compensation from salary and bonuses is expected to be similar to his prior deal at more than $50 million a year before taxes. Some sources estimate he will earn $280 million over the next five years from Real Madrid.

The deal will expire when Ronaldo turns 36 and the biggest in international football history. Ronaldo is estimated to earn $545,000 per week and includes a buyout clause set at $1.1 billion. This deal also allows Ronaldo to overtake Barcelona rival Lionel Messi in wages.

The Return on Ronaldo

In Nike’s announcement on the contract extension, the company writes, “Ronaldo is having yet another incredible year, for both club and country, and is unquestionably an icon of the game. He transcends football and is the most popular athlete on social media and the most famous athlete in the world.”

Ronaldo’s history with Nike is longstanding. He originally signed in 2003 and has since worn more than 60 different Nike Mercurial boots. In the aftermath of Brazil’s 2014 World Cup, sales showed that Nike produced 7 of the 10 top selling cleats in the world.

“I have a great relationship with this brand, I have great friends here in the company,” says Ronaldo. “We work as a family too,” he adds. “This is my brand.”