When the Super Bowl kicks off this Sunday, all eyes will be on the television screen when the game breaks to commercial. The anticipation of the advertisements is usually bigger than the game itself. One study by the National Retail Federation found that 73% of people who view the Super Bowl consider the commercials entertainment. This puts a lot of pressure on the advertisers of companies that are willing to drop $4.5 million per 30 seconds of airtime. The real question is, is it really worth all of that money? 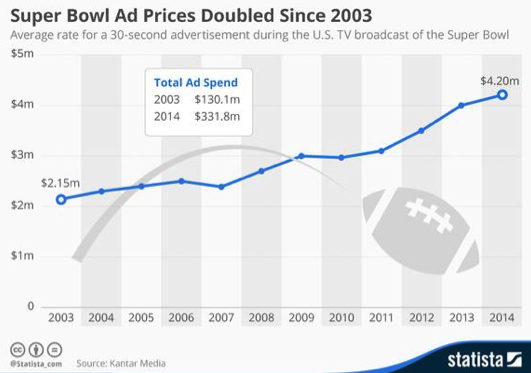 Advertising during the Super Bowl is a huge gamble for many companies. If the commercial fails, the company has lost all, or a significant portion of their marketing budget for the year. Marketers from various huge companies have all year to plan for this. The real test is being remembered for years after. Some of the most remembered Super Bowl commercials of all time use the strategy of humor, some use sympathy, and some use inspiration. The key to making a memorable commercial is being original and unique.

One site ranks the top 10 Super Bowl commercials based on popularity. Each video is ranked 1-10. Another site ranks the videos based on how many youtube views the video has received. On many sites the advertisers featured are very similar. Corporations such as Doritos, Budweiser, Snickers, Toyota, E-Trade and T-Mobile are just a few examples that are consistently remembered for their Super Bowl Commercials every year.

Even though an ad may get millions of views on social media it is not necessarily a “good ad”. Selling a product is much more than getting people to laugh. People have to know what you’re selling and also have a desire to purchase it. Andrew Davis came up with the “four key elements that make a Super Bowl ad successful; attention grabbing, entertaining, brand promotion, and brand recall.” The absence of any of these elements will make a commercial unsuccessful.

Many people might say that spending $4.5 million on a 30 second commercial is crazy. But the companies that are willing and able to spend that kind of money, end up getting a lot in return. The saying is true, “You have to spend money to make money”. Surprisingly, the advertisers are paying at a discount. The calculated value of a Super Bowl commercial is actually around $10 million. Also, an advertiser in the Super Bowl receives 54% higher brand recognition that any other ad during primetime. So it might seem crazy to drop that kind of cash for a mere 30 seconds but statistics show that it is a reasonable investment.

Ultimately, the way to make a memorable Super Bowl commercial is to first have the funding for one, be original with the idea, and have a good product. With these 3 things, people will be familiar with the brand and will be more inclined to purchase the product.