Over the past few years, college and professional sports have seen a series of format changes. What seems to be the underlying theme in the majority of the movements? Fan enjoyment. In an era that seems stricken by an abundance of entertainment opportunities, measures are clearly being taken to enhance the experience of sporting events for fans.

Bringing the Art of Heckling to Tennis

Ever gone to a tennis match with the intent to “get rowdy”?   The Big 12 has taken a new approach in hopes to engage more of the student body in matches.  The rule is called the Big 12 Tennis Decorum Policy and it states that fans are allowed to behave under the same guidelines as in other sports. Fans are encouraged to hoot, holler, and heckle at any point during the matches, including during points.  The goal is that it will attract a larger and more entertaining crowd, and tennis will become an exciting sporting event that students look forward to attending. The men’s head tennis coach at TCU, David Roditi, has been a huge proponent of the rule, and through his lead, TCU men's tennis has had the leading fan attendance in 2013 and 2014. Three times last year, TCU tennis drew a crowd of more than 1,000.  In April, TCU reported more than 2,000 fans at their match against Texas. Now that the rule is instated, Roditi thinks that is a huge step forward in the realm of college tennis.

Flop for a Flagrant No More

The NCAA has recently released a new set of guidelines that will be implemented in college basketball this season. Rick Byrd, chair of the NCAA Men’s Basketball rules committee and men’s basketball coach at Belmont University quoted, “we have spent the past year collecting data, opinions and considering proposals that will help our game...” The new rules focus specifically on the pace of play, and with the new guidelines the shot clock will be reduced to 30 seconds (previously 35 seconds) with a total of ten seconds allowed to get the ball to the front court. Under the new guidelines, the coaches will also have the inability to call a timeout while the ball is in play, which is in line with their initiative to increase pace of play for fan enjoyment. Keep an eye out for flopping this year though, because flopping to draw a flagrant foul is now reviewable through use of video.

The Chip Shot is Gone

One of the most evident rule changes to hit professional sports in the past year is the increase of distance for the NFL extra point conversion. A play that has seemed practically automatic has now become more nerve-racking while watching from the stands. Patriots head coach Bill Belichick led the charge for this rule change, saying last year that extra points weren't designed to be automatic when they were first put into the game. It was suspenseful when position players had to do the honors, but given the specialization of kicking, it became nothing more than a definite make. The stats defend his stance considering placekickers have converted more than 99 percent of PATs since 2010. Even though moving the kick back 13 yards only lowers the percentage made to 93 percent, that 6 percent could be the difference between a team winning or losing. 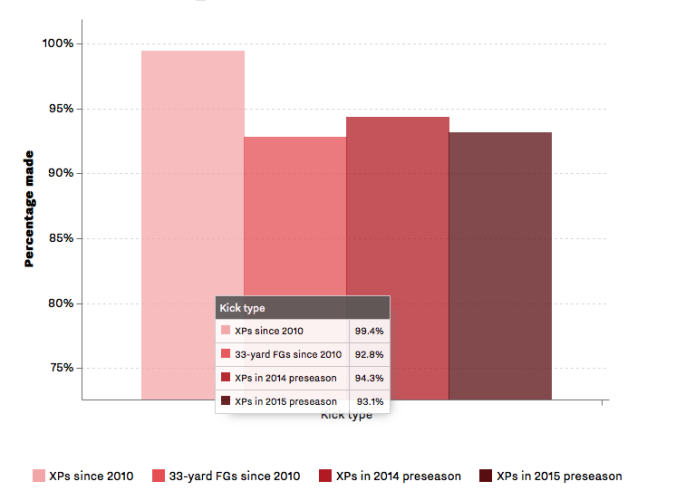 With fan engagement at the forefront, it is not unlikely to say that more changes are to come. Sports like NASCAR have recently made changes to their qualifying format and, globally, Cricket has made format changes that were intended to make the game simpler for the fan. In today’s world of sports, format changes are proving to be an exciting buzz, attention grabber, and trend.