Yale is a BIG Step for Under Armour

This contract and partnership with Yale is Under Armours thirty-third Division 1 partnership in the company. Under Armour will supply everything for Yale’s sports teams. Yale Athletic Director, Tom Beckett, said, “We are excited to work with a world-class company on a very special partnership that provides our student-athletes with the best sports apparel, footwear and equipment.” This is a huge partnership for both sides. This allows Yale to have access to some of the greatest sport apparel in the game, and also gives Under Armour the opportunity extend their market to knew customers and spreading their name.

Under Armour is the leading competitor to Nike. With Under Armour finally being apart of the Ivy League this gains one step back on Nike, and this could eventually lead to Under Armour eventually passing Nike. 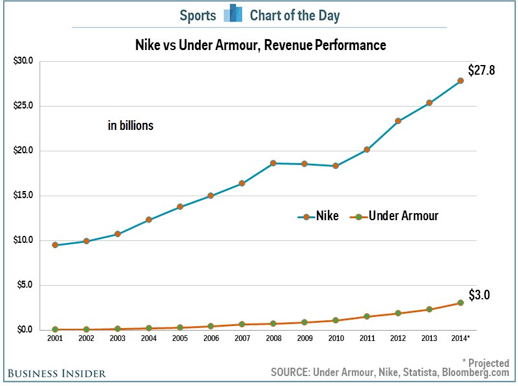 This graph below shows through 2014 how behind Under Armor is. It is important to know that Nike has ran the competition for years, and Under Armour is relatively new. Under Armour has a more consistent rise. With Under Armour gaining more and more contracts with big name schools, Nike needs to watch out for what Under Armour can do in the future (Gaines).

Gaines, Gork. "Under Armour Is Growing But Still Has A Long Way To Go Before Catching Nike." Business Insider. Web.