Typically, first year teams struggle to find their feet from the start, but Atlanta United FC was able to hit the ground running. Breaking attendance records, offering a unique viewing experience and reaching into the homes of the southeast, the soccer club is on pace to be the most successful expansion team to ever launch in the U.S.

The talk of the town for an incoming expansion team is usually, “how bad will they be?” However, now that Major League Soccer is seven months into its 22nd season people are questioning, “how good can Atlanta United FC really be?” Typically, first year teams struggle to find their feet from the start, but Atlanta United FC was able to hit the ground running. Breaking attendance records, offering a unique viewing experience and reaching into the homes of the southeast, the soccer club is on pace to be the most successful expansion team to ever launch in the U.S. As the below chart demonstrates, Atlanta United FC has completely shattered all attendance records for MLS expansion teams.

The team has no problem filling up their temporary home at Bobby Dodd Stadium. Atlanta United combined for a total of 147,230 fans at their first 3 home matches, the most by any MLS team during its first three home matches in history, according to ATLUTD. The club leads the MLS average attendance recording 46,381 fans per game compared to the MLS average of 21,562, according to Fox Sports. As the below table demonstrates, the team has had over 400,000 fans attend their first nine home games. If the momentum holds through the rest of the season, Atlanta United has a chance of surpassing the one million-fan mark for the first time in MLS history.

Club President Darren Eales states, ”I thought it would take us more time to create that soccer culture and our own Atlanta United culture, but from day one it’s been the most unbelievable atmosphere. The fans stand for the whole 90 minutes. They’ve got their own chants with Tifos, big flags that flail before a game,” according to Fox Sports. Not only are they able to get fans in the door, but the club provides an atmosphere that gets fans coming back. So, we are left to question how is this possible?

Most Successful Expansion Team Ever?

Numbers show that Atlanta United FC stands superior to every other MLS expansion team in the history of the league. The MLS began play in 1996 with ten teams. The league began expanding in 1998 with new teams in Chicago and Miami. Over the last two decades, the league has launched a total of 16 expansion teams around the U.S. and Canada. The league currently stands at 22 teams. According to MLS Commissioner Don Garber, the league plans to add 4 additional teams in the next few years including a second team in Los Angeles and a probable team in Miami. This would make the MLS the largest professional first division soccer league in the world.

The table below provides the average attendance for year one of every MLS expansion team. As you can see, if Atlanta United continues at its current pace, it will shatter the average attendance per game for all other MLS teams during their inaugural season. Given the team's on-field success and the fact the team is about to move into the brand new Mercedes-Benz Stadium which has significantly greater capacity than its current home field, it's safe to say that Atlanta United is the most successful expansion team in MLS history.

Atlanta United FC has done the immeasurable thus far. President Eales states, “No one in their wildest dreams thought that we’d be sitting here today,” according to Fox Sports. In order for this club to continue to make history, success after the regular season is a must. Yes, what Atlanta has accomplished so far is special. However, the team has the potential to place its name among the greatest of expansion teams by achieving something that has not been done since 1998. Winning an MLS cup in the first year of franchise history would be the ultimate icing on the cake.

It's All About Millennials

Atlanta is one of the fastest growing cities in America. The city is home to a high concentration of young adults with disposable incomes, which is a demographic that has embraced the MLS. MLS attendance continues to grow each year as the sport’s popularity rises from coast to coast. Professor Darin W. White of Samford University tweets, “If I could buy stock in one of the big 5 professional U.S. sports leagues, I’d put my money on the MLS over the next decade.” (@Sports_Biz_Prof) The following table displays total average league attendance since 1996. As you can see, the numbers continue to rise. Thus, Atlanta is proving to be a fantastic expansion location because of the massive millennial population and soccer’s growing popularity in the city. 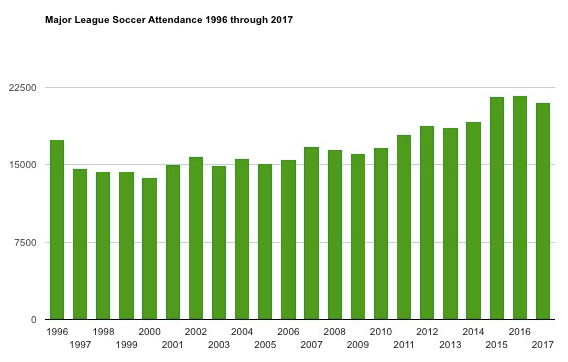 The Fans Just Keep Coming Back

Not only is the club extremely successful as far as getting fans through the door, but they have been able to retain fans game after game by using several marketing strategies. Although Bobby Dodd Stadium is their temporary home, the club has implemented cheaper food prices and transit hub locations for fans. Forget the usual $5 no-refill soda, Atlanta United offers $2 drinks with unlimited refills. The stadium is next door to Atlanta’s largest transportation system, known as the MARTA. The underground subway system allows fans with limited parking opportunities to arrive right outside of stadium gates.

As if cheap food and easy transportation aren't enough to allure fans, the club is set to take the field in the brand new Mercedes Benz Stadium come September. The estimated $1.6 billion dollar stadium, equipped with a retractable roof, offers fans a viewing experience few can turn down. While the stadium seats 83,000, it can be reduced for MLS games.

The club extended its presence into the homes of the southeast by striking a deal with Fox Sports South. By reaching into the homes of approximately 10 million people located in 6 different southern states, Atlanta United holds one of the largest TV footprints in the MLS.

This blog post was written by Samford University student Taylor Anderton. You can learn more about Taylor Anderton at https://www.linkedin.com/in/taylor-anderton-512066147/

Rosenblatt, R. (2017, March 03). Atlanta United are a monster in the making, even as an expansion team. Retrieved July 20, 2017, from http://www.foxsports.com/soccer/story/atlanta-united-2017-mls-season-preview-expansion