BIRMINGHAM, Ala., Oct. 6, 2017 —Passion. The word alone defines the unique magic of college football. From the game day traditions to the seething hatred for bitter rivals, unwavering passion runs deep in the veins of college football fans everywhere.

At the heart of that passion is the emotional connection — or relevance — between fans and their favorite school. Fans are drawn to the most relevant teams – the ones that connect with them on a deep emotional level (both positively and negatively).

So which school stands alone as the “most relevant” college football team?

According to the Samford University Center for Sports Analytics, three teams can make that claim — Alabama, Michigan and Clemson.

The combined relevance rankings include all Power 5 conference teams, along with a few additions including Notre Dame, Houston, Boise State, BYU and military schools Navy and Army. 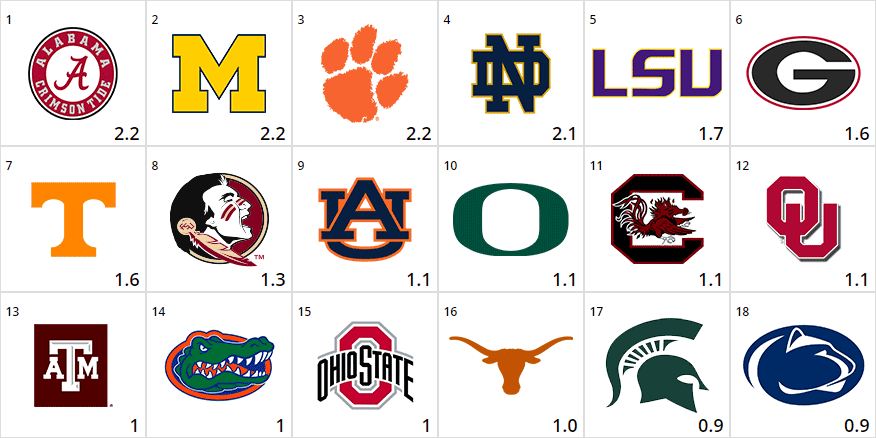 Unsurprisingly, the SEC takes the conference crown in the College Football Relevance Rankings with eight teams in the top 15. Michigan and Ohio State are the lone Big 10 representatives in the top 15, while the ACC boasts two teams as well — Clemson (#3) and Florida State (#8). The Fighting Irish of Notre Dame are ranked fourth.

Despite experiencing some recent down years overall as a conference on the field, the SEC still dominates in relevance to college football fans, compared to the other conferences. The Big 10 edges out the ACC for runner up by a tenth of a point, followed by the Big 12 and PAC-12, who are tied for fourth place.

It appears the SEC tagline “It just means more” is quite reflective of the fan’s emotions.

It’s the usual suspects at the top of the list, but which universities are the cellar dwellers? Rounding out the bottom five is Kansas, Northwestern, Wake Forest, Army and BYU.

Perhaps the biggest surprise throughout the entire list is the No. 16 ranking for the Texas Longhorns. Long considered one of the premier college football programs in the country, the Longhorns have struggled to maintain success on the field following their 2005 BCS Championship. Texas fans are likely none too happy to see schools like South Carolina, and especially, hated rival Texas A&M ranked higher on the list.

Each college football team’s relevance score (listed below its logo) is a custom measurement of the team’s significance to U.S. sports fans based on its affinity score, audience size and the number of members who already have this interest.

In addition to fans’ emotions towards a specific team, relevance can also be a powerful predictor of sponsorship success between businesses and teams as the ultra-successful sponsorship relationships are built through a company and a highly relevant sports team.

These rankings are not set in stone, however. While the larger, more passionate fan bases will be more stable compared to those schools with smaller fan bases, all schools are subject to fluctuating relevance scores based on a number of factors (on-field performance, rival news, coaching staff news, etc.).

The Center for Sports Analytics regularly updates the College Football Relevance Rankings, so be sure to check back to see how your team’s relevance changes over time.