Could Data Analytics Make Human Scouts/Evaluations Obsolete In the MLB?

The fact that the Houston Astros and the Los Angeles Dodgers played for the World Series this year provides grounds for a groundbreaking change in the MLB. While other Series teams have relied on analytics, including the Chicago Cubs and Cleveland Indians last year, never have there been two clubs who use it as much as the Dodgers and Astros. Front offices are being filled with employees who have never played a game in their lives, but have proven that they can find that diamond in the rough that they can build into a superstar with just a few minor adjustments.

Will human scouts be needed because of the advances in technology?

Human scouting has been a key tool to recruiting talents for the MLB for decades. However, a human scout cannot compile all the newfound data that teams are gathering. Some longtime fans of the game might be convinced that scouts are the best eye for talent but this years’ World Series might have proven otherwise. The Dodgers’ top decision–makers are an ex-Wall Street analyst and an MIT graduate with a doctorate in philosophy; not exactly filled with former players (Carpenter 2017). But then again, the Astros and Dodgers aren’t looking for typical baseball solutions. Both teams are making strides and innovating faster than the rest of the league and succeeding. With participation in NCAA baseball increasing over 32% since 2001, scouts cannot monitor each player’s every move throughout the season (Sports Market Analytics). 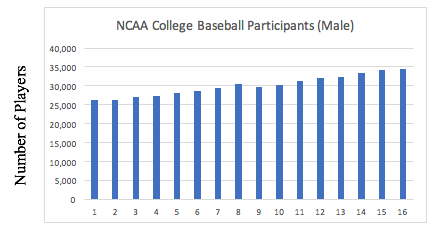 How is data analytics better than human scouting?

Both data analytics and scouting have the goal of finding the best players in the farm systems or to find that hidden gem that everyone is overlooking. A perfect example was a move that the Los Angeles Dodgers made at the trade deadline this year. Tony Cingrani was a relief pitcher for the Cincinnati Reds who was a hard thrower but had little success. The typical scouting report on Cingrani was that you could ignore the fastball almost completely because he could not throw it for a strike. The Dodgers however looked into their data analytics and realized that Cingrani should throw his slider more and throw his fastball to the upper right portion of the strike zone. This strategy would constantly change the eye level of the hitter and make his fastball a strike more often than not. Justin Verlander was another huge proponent of the new age data analytics. He was struggling in his last couple starts with the Tigers and scouts could not figure out why his pitches were lacking. The biggest pitch that was lacking was his slider, which was arguably his “strikeout pitch” for the majority of his career. When the Astros were evaluating him and a numerous number of screenshots of his pitching, they realized that his problem was the hand position on the ball. After they traded for Verlander, the Astros fiddled with his hand position in his bullpens and fixed his issues. In his best start of the postseason he threw 40 sliders, the most he had ever thrown in the 404 times he pitched a big-league game (Carpenter 2017). There would be no way a scout watching the game could realize that his hand position was the fault that was keeping him back. Most scouts wrote that Verlander could be falling victim of father time.

Room for Improvement for the Houston Astros?

There is no doubt that the hitting of the Houston Astros is what drove them to their first World Series ever. But a stat that is often overlooked could be the focus of the team moving forward. Outs above average is a relatively new metric in baseball that measures how much better or worse an MLB player is in field compared to the average Major League player (Teague 2017). The Houston Astros do not have a single player in the top 15 in the entire MLB. According to ESPN, Houston was 10th highest in errors made in the 2017 regular season. If they were to focus their efforts on building a better defense in the offseason, we could be looking at a possible dynasty in the future.

The 2017 World Series was the first “all computer” series in the history of the league. Some of the biggest proponents of data analytics were the final two teams standing in the entire MLB. The rest of the league seems to be following suite and the race for big data analytics in the MLB is on. Decades of human scouting and analyzing might be soon obsolete and taken over my computers. Some of the highest influencers for organizations are people who have never played a game of baseball in their lives and are better at identifying talent than scouts that have been involved in the league for most of their lives. It seems that we are experiencing a paradigm shift in the MLB and the Houston Astros and Los Angeles Dodgers have proven that this outlook on the league is not going anywhere.