Expanding the Zone: How Catchers Are Stealing the Show

Published on September 26, 2017 by Steven Goldberg   Share this on:

One of the toughest things to do in sports, as we all know, is hitting a baseball at the Major League level. Most humans could never fathom only having less than one second to register what kind of pitch is thrown, the pitch location, and whether or not to swing. Today, I wanted to find the pitchers who have benefitted the most from the expansion of the strike zone by getting “pitchers’ strikes” on pitches outside of the zone.

I was able to produce a leaderboard of sorts, using the data given to me by baseballsavant.com (another phenomenal website that provides endless data to explore).  This list comprises the pitchers who have gotten the most called strikes on balls outside of the zone. 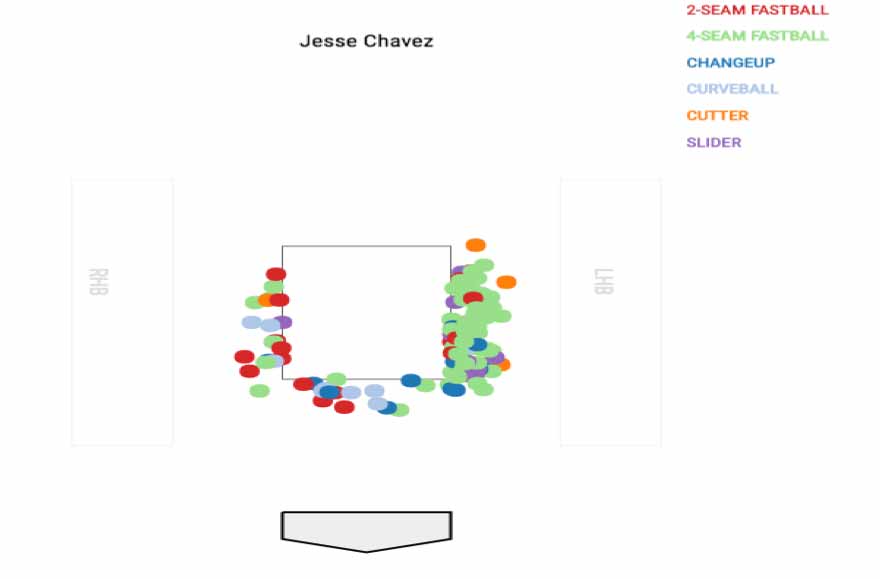 What we see here is that the Braves and Angels organizations have benefitted the most from pitches outside of the zone. Let’s break down LAA Jesse Chavez’s graph on these pitches:

From this graph, we can see that Chavez (right handed pitcher) has gotten the most called strikes on pitches outside of the zone via the 4-seam fastball on the outside corner to right handed batters (image is from the catcher’s point of view). Chavez has league average horizontal and vertical movement on his four-seam fastball, so the amount of strikes called outside of the zone has nothing to do with his four seamer’s movement. The credit for this must go to his catcher, in this case it’s Martin Maldonado, one of the best defensive catchers in the game. In fact, the catchers for both teams represented on our leaderboard (minus Milwaukee), Tyler Flowers (ATL) and Martin Maldonado (LAA), are among the best pitch-framers in all of baseball. Their ability to receive pitches and frame them in a way that they appear to be inside of the strike zone is a great benefit to their pitching staffs.

The table above from StatCorner shows us exactly how valuable these catchers are to their teams.  The “Sample” tab shows the number of pitches the catchers have received. The “zball%” column shows how many balls in the strike zone where called a ball (the league average is around 15.5%). However, you must understand that these catchers (Maldonado and Flowers) have gained a reputation within the league for “stealing” strikes, so umpires may be looking to unfairly penalize them for this skill. “oStr%” is the exact opposite of “zball%” and this explains the pitches we are examining that appear outside the zone and the catcher frames them so they are called strikes.  League average is roughly 6.5% so we see that our two catchers that we have been focusing on are well above average in this category. Catchers on average lose their pitchers 24 strikes throughout the year (+Calls -24), while we see Maldonado and Flowers providing positive value in this department. “PerGame” demonstrates how many pitches per game these catchers are positively affecting, and Flowers’ and Maldonado’s RAA shows that they are respectively worth 23.5 and 9.3 runs above the average catcher with their defense.

If you want to see pitch framing on a night-in, night-out basis you can turn to our two examples of Tyler Flowers of the Braves and Martin Maldonado of the Angels to see how two of the best catchers in baseball are constantly doing what they can to help their ball-club win games.