The Relationship Between Popularity and Profitability in College Football

If you are a college football fan, then you have a favorite team. Otherwise, what kind of fan would you be? And if you have a favorite team, then you watch them play. You buy apparel and memorabilia representing them. Usually the most popular teams sell more tickets, merchandise, and sponsors, however, this is not always the case. As of 2016, the most popular college football team in America is Ohio State University while the most profitable is the University of Texas. 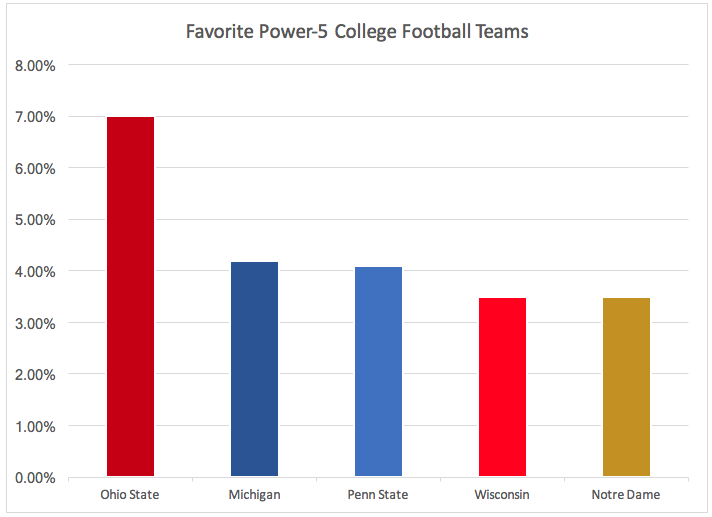 The graph above shows the top five teams that Americans claim to be their favorite team. Ohio State stands at 7.0%, a substantial 2.8% above the second most popular team, OSU’s rival, Michigan. The Big-10 represents four of the five most popular college teams. These numbers coming after the Big-10 finished the bowl season with the best conference record, taking the crown from the college football juggernaut known as the Southeastern Conference. 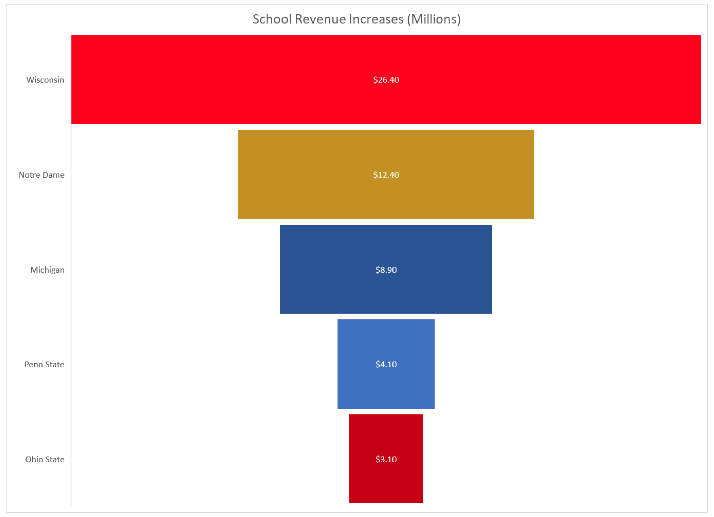 Speaking of teams with national attention and popularity, you might expect increased revenue. All five of the top 5 most popular college football teams saw increased revenue from 2015 to 2016, however, Wisconsin saw the highest revenue increase of any team. From 2015 to 2016, Wisconsin’s college football revenue jumped from $44.8 million to $71.2 million. The success and popularity of Wisconsin’s football team has created huge financial benefits for the school. And as a school in the Big 10, the conference benefits too. The Big 10 has a six-year media rights deal with FOX and ESPN. As the teams in Big 10 rise in popularity, media broadcasters may throw more money towards the conference after the current deal to show more of their games. Media rights are one of the four major ways teams and leagues generate revenue. As technology is expanding, the way fans consume sports is ever changing. Thus, media rights deals have surpassed gate revenues in the past few years. More money is generated through online viewing than ticket sales. The Big Ten is sitting in an excellent position for increased revenue as they own four of the five most popular college football teams in America.