Why The SEC Dominates all of College Football

It is no secret that the SEC is the most powerful conference in all of college football. In every aspect possible, the SEC has completely dominated the sport business world. Athletes in every sport fight for the chance to play their respective sport at one of the fourteen different SEC schools. Some programs, such as the University of Alabama, the University of Georgia, and Auburn University have some of the top athletic programs in the country, as well as incredible academic programs on top of that.

When athletes go to look at colleges, there are a lot of factors as to why they chose their particular school. For example, as an athlete, one of the main things you look at is the coaching staff. Those are the coaches that you will be with for four years, so you have to make sure they are good ones. You also look at campus location and stadium size. Usually, the bigger name schools are known more for their stadium sizes and fan base, compared to the smaller schools that may be more known academics or community involvement. 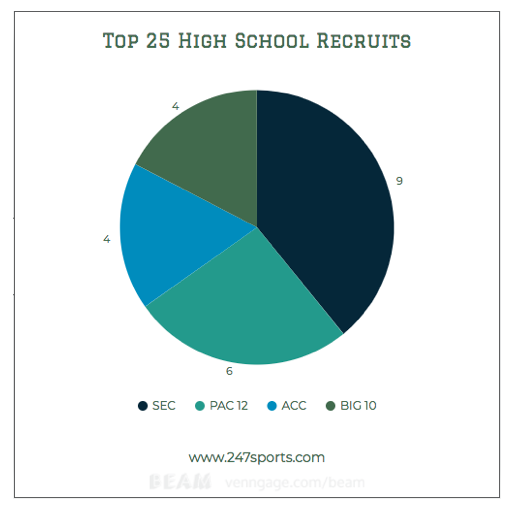 In 2016, the Southeastern Conference raked in nine of the top 25 high school recruits, while the PAC 12 came in at a close second at six recruits, followed by the ACC and Big 10 both tied at four. Jeremy Hillman from Bleacher Report wrote an article about how the SEC pulls in so many top recruits. He gave us eight simple answers: coaches, stadiums, the NFL, winning traditions, fans, TV exposure, geography, and money (bleacherreport.com). Going off of this John Adams from tennessean.com really emphasized the fact that coaches are the reason that the SEC is as great as it is, and it all started when Spurrier started coaching at the University of Florida back in 1990. Coaches like Nick Saban, Mark Richt, and Hugh Freeze have really shown how good coaching can make a difference in a team. Current players and future recruits alike both appreciate coaches who put time and effort into their team, and it seems as if the SEC has something special in that department.

The SEC is known for their huge fan bases and excessive amount of merchandise all across not just the southeast, but across the country. The amount of revenue that is brought in by the SEC is incredibly high compared to the other conferences. Peter Berkes of SB Nation wrote, “The SEC makes a per-team average of about $14 million more in revenue than its closest peer and $12 million more in average profit after expenses” (sbnation.com). The team that brings in the most revenue is Texas A&M, raking in $192,608,876 a year. 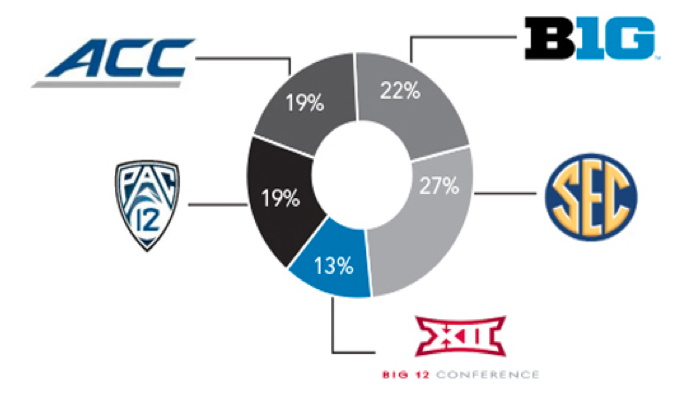 Another big component of revenue is TV time for teams. Each team pays for air time, but more often than not, the audience will see an SEC team playing. In a 2015 study done about air time and views during bowl games by Top Right Partners, it was found that the SEC was the highest viewed conference out of the 5, followed closely by the Big 10. These views go a long way when you consider what kind of sponsors these teams are getting. Sponsors want to support teams that win and have a good presence in the sport business world. The SEC has numerous big name sponsors, such as AT&T, Regions, and Dr Pepper. 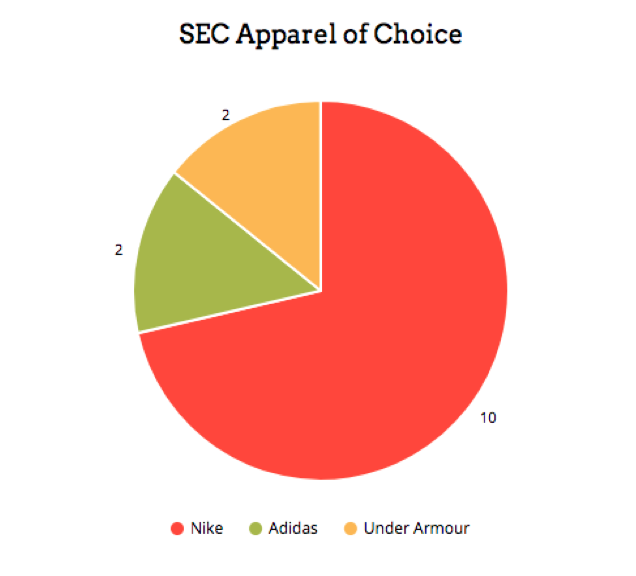 Going along with the brand names, uniforms are a big part of a team image. The three main uniform companies that sponsor college football are Nike, Under Armour, and Adidas. NIke covers a whopping 10 of the 14 teams in the SEC, only not partnering with Auburn, Mississippi State, South Carolina, and Texas A&M. Some teams outside of the SEC are covered by Russell Athletics, but none of the teams in the SEC are. Some of the best looking teams are known for their uniforms, like the University of Alabama, the University of Georgia, and Vanderbilt University. To play good, you have to look good, and to get sponsored, you have to show it off. Uniforms are the best way to do this. 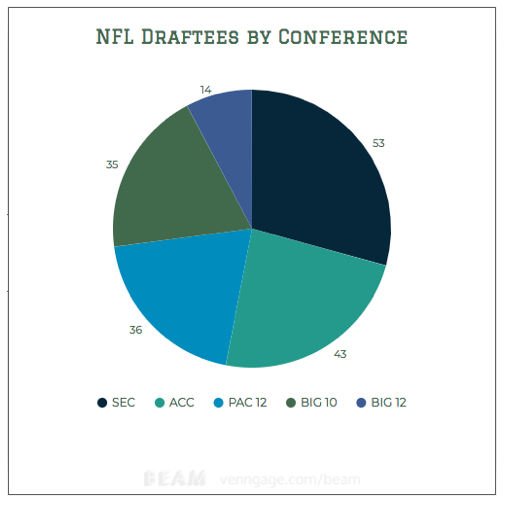 On top of the SEC being the best conference in college football, it is also the best conference in the NFL. Every year, the NFL drafts the most college football players from the SEC, and there is a reason. As Mike Bianchi from Orlando Sentinel says, “The best players are attracted to a league where they will play in front of the largest crowds, work out in the plushest facilities and get developed by the best coaches” (orlandosentinel.com). Players in the SEC are so used to working hard for good coaching and facilities, they are willing to keep up what they were doing in college in the league.

*Note: all charts were made on beam.com, not excel