Published on November 6, 2018 by Patrick Schilling   Share this on:

With the 2018 NFL season more than halfway over, the race for MVP has become clearer. Except for Rams’ running back Todd Gurley, the field is filled, like always, with a multitude of quarterbacks. Chiefs’ QB Patrick Mahomes has been dazzling in his first nine games this season, with another gem against the Browns this past week. Drew Brees has also worked his way into the talks with a signature performance against the previously undefeated Rams. But who else can contend with these two quarterbacks?

Both Matt Ryan and Phillip Rivers in my opinion, have not been talked about enough in the MVP conversation. Ryan has led a Falcons to a .500 record despite the team’s defense being in shambles. His yards per game (335.6) top the league by thirteen yards to second place. He’s managing this while throwing the ball just 300 times putting him 10th in the league in that category. Although he’s just fourth in total yards, the top three places have all played one more game than Ryan, and if he were to meet his average in the extra game, he would lead the league in yards.

Rivers has been all but lost in MVP talks despite leading his Chargers to a 6-2 record in the tough AFC. He’s even with Matt Ryan in both touchdowns (19) and interceptions (3). Although he’s 13th in the NFL in total yards with just over 2200, he’s fourth in yards per attempt and one of only four quarterbacks with that number over nine (9.1 Y/A).

Above, are numbers from Phillip Rivers’ last five games, all of which the Chargers have won. Only once did he top 30 attempts and it didn’t even end up being his highest number of yards in those games. Once the Chargers’ offense lowered his passing attempts, he was able to get more comfortable and cause damage to the defense on every throw. Topping ten yards per attempt in three straight games makes your offense very hard to stop.

Jared Goff is a bit more of a sleeper for MVP, mostly because his running back is leading the award in most people’s eyes. Despite that, Goff is putting up very nice numbers in the passing game and keeping the 8-1 Rams on track.

Despite having an incredible run game behind him, he’s clearly been one of the top-five passers this season.

Overall, Goff stacks up very well against the top competition, but not quite at the top of it. I believe Brees and Mahomes still lead the group but these other three QBs are not far off. One bad game could be enough to derail any of their chances at MVP.

Although I believe the five quarterbacks above are at the top of the league, there are a couple players who could be dark horses to win MVP.  Both Cam Newton and Deshaun Watson have a legitimate chance to make a splash in the MVP conversation. They are the two most mobile quarterbacks in the league, both can throw the ball downfield, and are on their way to taking their teams back to the playoffs. 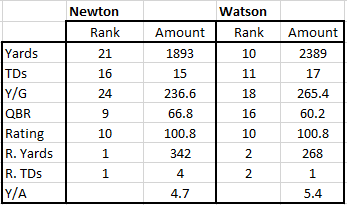 Newton has middle of the road passing numbers this year, but his ability to run combined with his cannon of an arm is what makes him truly dangerous. His 342 rush yards this season dwarf the second-place number for quarterbacks which happens to be an also impressive 268 yards from Watson. In his pass three games for Carolina, all wins, he’s thrown for over 200 yards, two touchdowns, no interceptions and rushed for at least thirty yards. To keep up that line for a three-game stretch is impressive but has really become commonplace for this Panthers offense.

Watson on the other hand, is much more of a passer than Newton. He is near the top ten in most passing categories and holds down second in rushing yards among quarterbacks. Since starting 0-3, Watson has led the Texans on a five-game win streak while throwing a combined ten touchdowns, three interceptions and 1,143 yards. If it weren’t for the Texans’ slow start, Watson could very well be in the top-five race for MVP right now.