Analytics and the Astros: Data Analytics didn’t win the Astros a Championship Over Night

The defending 2017 World Series Champion Houston Astros, were picked to win way before the beginning of their 2017 season, because of what data said. Since the Oakland A’s really took on the moneyball method, analytics have become a major player in baseball. For the Houston Astros, General Manager Jeff Luhnow, is the mastermind behind it all. 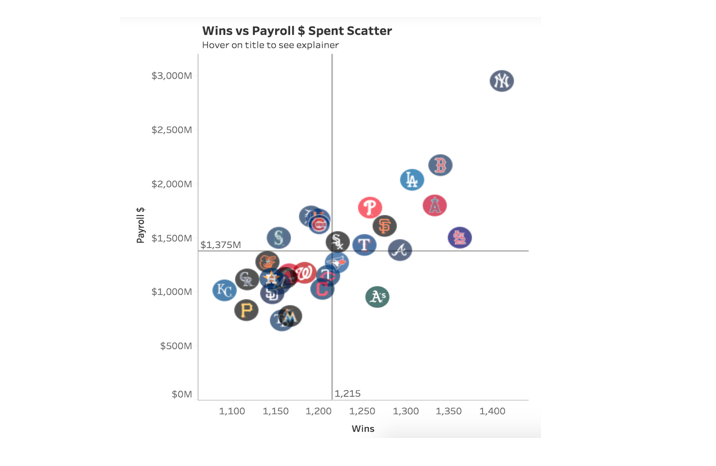 Above is a graph showing data going based off the money ball performance method, showing how teams can spend less and still win more. This graph only goes through the 2016 MLB season which at the time the Oakland A’s still really were the only team that had figured it out, spending less than average and still winning more than average. This is only one example though of how analytics is continuing to help change the game of baseball.

When Luhnow came to the Astros in 2011 he took on a “data driven transformation” (De Smet) for the team. This is ultimately what took the Houston Astros from last to defending World Series Champions. During an interview, post the 2017 season, Luhnow discussed how it took a while to get everyone on board with analytics back when he started in Houston (De Smet). This is almost comical to think of now because looking back everyone has to be so thankful the organization is now run heavily through data analytics.

However, Luhnow explains that the transition to more of a data analytics strategy did not turn the team into World Series Champions overnight. Lots of change needed to be made, and a lot of patience was needed. And it took just that, change did not happen overnight for the Houston Astros. The 2012 vs. 2017 seasons were drastically different, and it took a while to get there. Luhnow states that, “the harder part was changing the behavior of the coaches and players” (De Smet). It did not matter whether these were major or minor league players, they were some of the hardest to get on board with making decisions based off data, according to Luhnow (De Smet).

Understandably so, players had a hard time adapting to new learning and changing the ways they had been taught for so many years. Luhnow said at times it was hard to convince the players that what they were doing now was actually the right way to do it. So while it was risky, Luhnow and the team decided that during spring training of 2014 they were going to bring all of the players in and share the data with them (De Smet). All of this was so that the players could really understand why the changes were being implemented. What a pivotal moment this was for the Astros according to Luhnow (De Smet).

So what is next for the Houston Astros? They are coming off of the franchises first World Series win. Luhnow states, “if you don’t ever get thrown out at third, you’re leaving runs on the table” (De Smet. Meaning, the Astros are being aggressive with the new technologies they are implementing in the organization. They know that mistakes will be made along the way, and not everything will be perfect on the first try, but this is how to stay ahead (De Smet). Luhnow goes on to give examples of the many ways the Astros are using new technologies to stay on top. He states, “big data combined with artificial intelligence is the next big wave in baseball, and I think we’re just starting to scratch the surface” (De Smet). While he would not go any further into discussing this, because it is “highly proprietary,” we do know the Astros are looking into this.

With this being said the Houston Astros are currently 54-28, and are staying at the top this season. As the Astros continue to win they are great example of analytics and baseball and the process it takes to become World Series Champions. Who knows, they may even be raising another trophy come October.

This blog post was written by Samford University Student Brooke Jenkins. You can learn more about Brooke and her passion for sports at (https://www.linkedin.com/in/brookejenkins22/).