Can the Rays' New Stadium Save the Team?

On Tuesday, July 10th, the Tampa Bay Rays released images for a proposed stadium that will reside in Ybor City in downtown Tampa. The images released were everything you could want as a fan in the area: an all glass dome, accessible from downtown with plenty of amenities surrounding it. The question is, is it enough to bring the fans back to the seats to watch the Rays? For this, I’m not going to focus on who will pay for the stadium, I’m instead going to assume that the proposed stadium will be built and see if it’s enough to rejuvenate the franchise.

Since the Rays beginning in 1998, it’s fair to say that they’ve struggled filling seats in Tropicana Field. From 2000 until now, they have never been able to muster more than two million total fans in a season, the only team to do so.  Along with that, since 2001 the Rays have finished in the top-five lowest attendance fifteen times, including seven seasons as the least attended team.

One of the most telling numbers to me that shows the attendance in Tropicana Field will not improve is the attendance during the 2008 season when they went to the World Series. 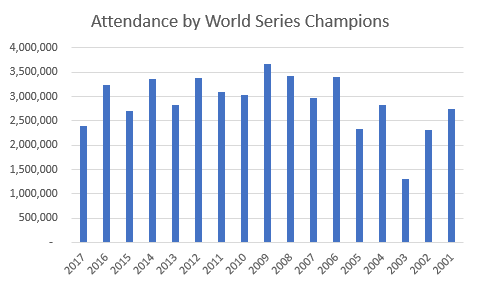 Above is a chart of the total attendance from World Series Champions since 2001. The Tampa Bay Rays only managed 1,780,791 fans in 2008 when they made the World Series compared to the Philadelphia Phillies who were the champions with 3,422,583 total fans. For a team to be having such a successful season, but not pull in a lot of fans, it shows that a change needs to be made in the organization.

Since 2000, fifteen new ballparks have been built for Major League Baseball, that’s half of the teams. 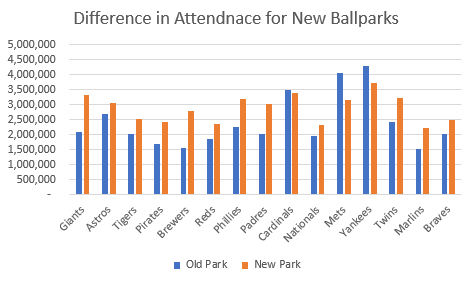 In all but three of the stadiums, attendance increased dramatically in the first year of a new stadium. The only stadiums it did not increase in were both stadiums in New York and in St. Louis. Overall, the average percent increase in attendance in Major League Baseball is around 18% after building a new stadium. The biggest increase out of all the teams was the Milwaukee Brewers at a 78.64% increase between the years.

Although it will take much more than a new stadium completely flipping the Rays attendance numbers, it’s encouraging to note that their neighbors in Miami had a 45.96% increase after they constructed their new stadium. The Rays proposed stadium would also include a seat decrease, going from 42,735 seats to 30,842 seats making it the smallest park in the majors. I’m actually a big fan of this change, I would rather my stadium have less people but be full as opposed to more seats but have a lot of empty spots.

I think that the Rays will eventually have the stadium approved. I also think it’s the organization’s last attempt to popularize the team again before they will be forced to move the team or take more extreme measures. The biggest issue currently is of course, who is going to pay for the stadium. The owners want the public to foot the bill and the public wants private investors. Either way, getting the stadium out of St. Petersburg will be a huge help.