Imagine this scenario: it is early December. The air is frigid. You and your friends are standing together in a line, packed together like sardines, all staring at one man: your college football team’s kicker. You, along with tens of thousands of other fans, all have your eyes fixated on one play. One play that can send your team forward to compete for a championship, or the play that ends your season in the blink of an eye.

A lifelong memory, waiting to unfold before your eyes.

Attendance at sports events is everything. Packing the arena ensures a loud environment in favor of the home team. Filling the seats provides an electrifying atmosphere for fans to enjoy. Selling tickets is the most direct path to profitability for any sport in the world. The majority of sports in America are working tirelessly to combat attendance rates, as they appear to be stagnant, or in many cases, falling each year.

College football, however, is thriving... for now.

Fans are pouring into college campuses around the nation, and in a steadily increasing number.

College football is the king of Saturdays in the fall, as no other fall sport, collegiate or professional, comes close to rivaling the attendance that football can muster. The popularity of football has always been high, but we can see that over a 15-year period from 2001-2016, the attendance of these games in person has risen at a somewhat steady rate.

College football succeeds due to its exciting atmosphere, with authentic passion that cannot be replicated. In the words of Washington State head coach Mike Leach (@Coach_Leach), “There's a lot of people. It's like Woodstock, except everybody's got their clothes on." This kind of party-like environment, clothed in tradition and school pride, is what makes college football so appealing. It’s also a large reason why college football’s total attendance numbers have risen in the last 15 years.

However, these numbers are slightly inflated due to one specific variable: the number of games. Except for the FCS level, every division in college football has fielded more and more games throughout the past 15 years. The most obvious example is the staggering number of “bowl games” at the FBS level. Last season ended with 40 bowl games, with 80 teams participating. This is almost two-thirds of all FBS teams participating in the “post season”.

It still holds true that if a college football game is available, people will attend it. However, the average attendance per-game has dropped in recent years. In fact, Dennis Dodd (@DennisDoddCBS) wrote the following for CBS: “For the first time in history, average attendance declined nationally for four consecutive seasons.” 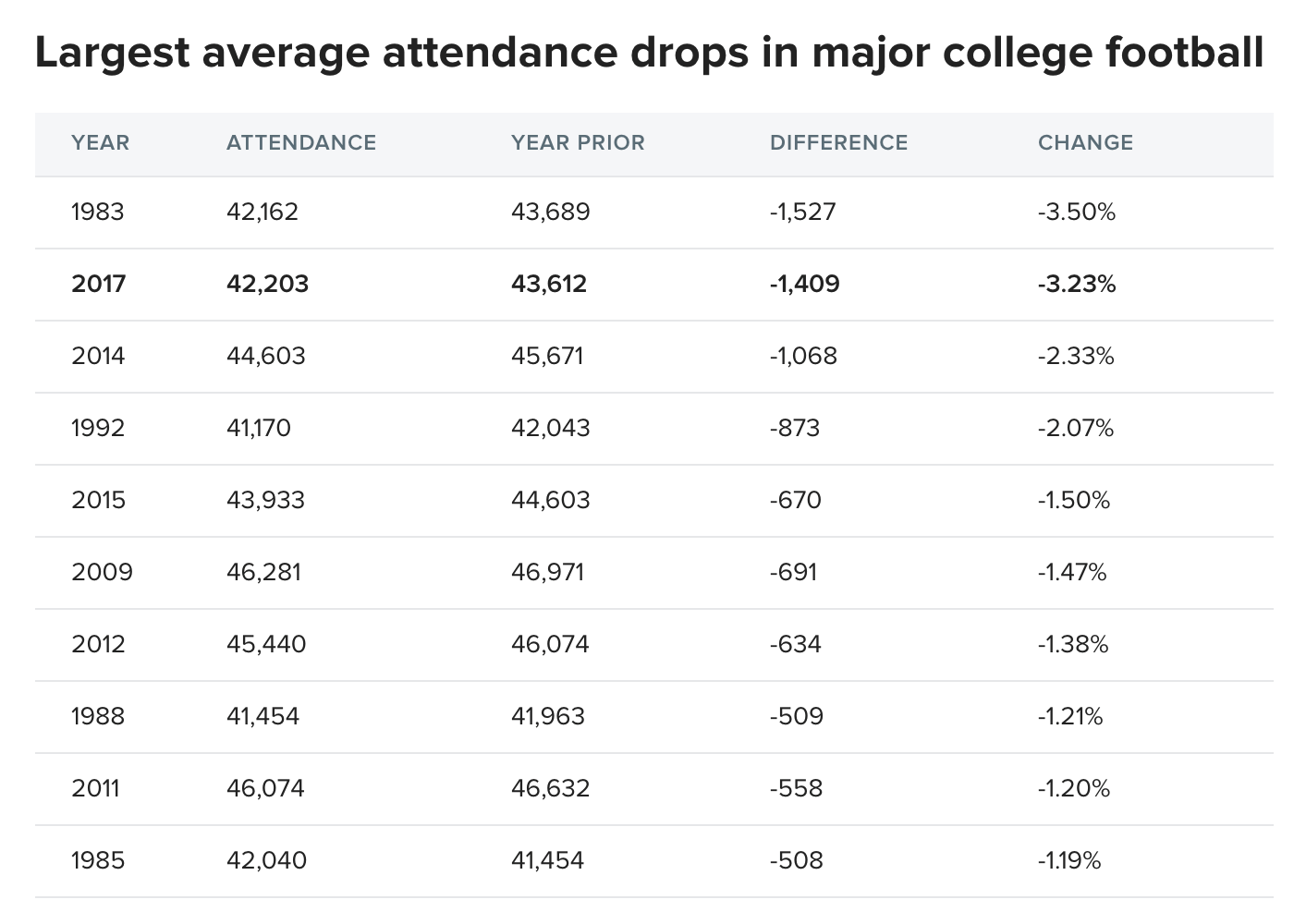 College football remains wildly popular because it is so engrained in society. As Erik Brady (@ByErikBrady) puts it: “College football in the Bible Belt is so often called a religion as to be a cliché, though it offers the distinct advantage of being true.” As we can see, so long as the NCAA puts out football games, the fans of America will tailgate and cheer with thousands of their closest friends.

But it is clear that a trend in the wrong direction has begun. Attendance per-game is declining, and it is declining at alarming rates. While four years is a very short time frame to examine, it may show us bad news on the horizon. The NCAA, or the individual conferences, will need to examine the potential reasons for why attendance is dropping. They will have to work together to make attending the games more appealing, especially to younger demographics.

In my estimation, there are two possible culprits that seem more likely than any others: the improvement of television broadcasts, and the over-saturation of the college football market. Television studios are rapidly improving, and there is little to nothing that the NCAA can do to combat that. All the NCAA should do is charge a huge sum to broadcast the same, and live with their earnings.

But the over-saturation problem can be solved. There is no need for 40 bowl games, as the lesser bowl games between two below-average teams often draw lackluster attendance. This alone could be the culprit for declining “per-game” attendance. These games aren’t exciting, and the teams are often so far away from their respective campuses that fans will not travel (we’re looking at you, Bahamas Bowl).

College football is still the king of Saturdays. It will remain king for the foreseeable future.  But if the NCAA wants to increase their “per-game” attendance, and not just “total” attendance, they must look for some solutions. College football still has that “Woodstock” atmosphere, and for the sake of the sport, schools must capitalize on that.